Court hands defeat on polygamy to family from 'Sister Wives'

The Denver-based 10th Circuit Court of Appeals found that the lawsuit Kody Brown and his four wives filed is moot because there is no credible threat that they would be prosecuted under the law. The Browns are featured in the TLC reality show "Sister Wives."

"The Brown family is obviously disappointed in the ruling but remains committed to this fight for the protections of religion, speech and privacy in Utah," the Browns' lawyer, Jonathan Turley, posted on his blog. They intend to appeal.

Utah appealed the ruling, arguing that the U.S. Constitution does not recognize the practice of polygamy as a fundamental right, and the state's law protects women and children from abuse.

The Browns sued Utah over its polygamy laws in 2011 and fled their home in Lehi for Las Vegas after Utah County Attorney Jeff Buhman threatened to prosecute them. In most polygamous families, the man is legally married to one woman and "spiritually married" to the others.

In May 2012, Buhman announced a policy that his office would only prosecute polygamists who induce a partner to marry through misrepresentation or are suspected of committing crimes such as fraud or abuse. 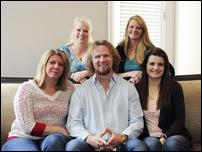 Utah prosecutors say a polygamous family made famous by a reality TV show won't face charges if a law against plural marriage stands.

"Nothing in the record suggests the Browns fit, or in the future may fit, into either category," according to the ruling drafted by Judge Scott Matheson Jr., a former University of Utah law professor.

The Utah Attorney General's Office, which represented Buhman in the appeal, applauded the 10th Circuit decision, noting Utah County has a similar policy to the state for prosecuting polygamists

"We want them to come out of any shadows to report crimes, avoid abuse and continue to live peaceful and productive lives," Attorney General Sean Reyes said in a statement. "We have worked with them in the past to those ends. And we have not used our scarce resources to prosecute them unless there is evidence of violence, fraud or corruption."

"Nothing in the record suggests the Browns fit, or in the future may fit, into either category," according to the ruling.

The appellate judges didn't consider the Browns' religious freedom arguments and wrote that Waddoups shouldn't have either because the family didn't have legal standing to sue and the case was moot after the policy change.

Turley said the ruling departs from previous court decisions on standing and mootness.