Obama appears to have called the GOP's and Hatch's bluff in choosing U.S. Court of Appeals Chief Judge Merrick Garland to succeed conservative Justice Antonin Scalia, who died Feb. 13. The president sent the nomination to the Senate on Wednesday.

Last week, the seven-term senator called Garland a qualified candidate, saying, "The president told me several times he’s going to name a moderate, but I don’t believe him. He could easily name Merrick Garland, who is a fine man. He probably won’t do that because this appointment is about the election. So I’m pretty sure he’ll name someone the (liberal Democratic base) wants."

When Garland was considered for a spot on the high court in 2010 that ultimately went to Sonia Sotomayor, Hatch said he would be a "consensus nominee" and that there was "no question" he would be confirmed.

Hatch said Wednesday that while the Constitution allows the president to nominate a candidate to fill the vacancy, it also gives the Senate power to grant or withhold consent.

"I think highly of Judge Garland. But his nomination doesn’t in any way change current circumstances," Hatch said. "I remain convinced that the best way for the Senate to do its job is to conduct the confirmation process after this toxic presidential election season is over."

Hatch said it's not about the person but about protecting the integrity of the Supreme Court.

"People ought to take a deep breath. Let's take it out of this toxic atmosphere," Hatch said on KSL Newsradio's "The Doug Wright Show." 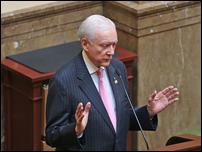 Orrin Hatch: Waiting to replace Scalia 'fair to both sides'

Sen. Orrin Hatch, R-Utah, told state lawmakers Tuesday that it's "fair to both sides" to wait until a new president is elected to fill the vacancy on the U.S. Supreme Court left by the sudden death of Justice Antonin Scalia.

Lee said it would be waste of the Senate's time to hold hearings on Garland.

He said in light of the contentious presidential election, he and his colleagues on the Senate Judiciary Committee have already given their advice and consent on this issue: "We will not have any hearings or votes on President Obama’s pick."

"It is clear that Lee and Hatch are once again placing the petty politics of an election year above their constitutional duties and above the interests of the American people who deserve to have a fully functioning government," he said.

University of Utah political science professor Matthew Burbank speculated that Obama picked Garland not as someone likely to shape the court for years to come but as someone the Republicans can't write off.

"This is a horribly convoluted circumstance," he said. "There are games within games going on here."

Garland presides over the federal appeals court in Washington, D.C. The Senate confirmed him to the court in 1997 with support from a majority of Democrats and Republicans.

At the time Hatch, who said he knows Garland personally, praised his legal ability, honesty and acumen.

A native of Illinois, Garland graduated from Harvard Law School and served as a clerk for then Supreme Court Justice William Brennan, a liberal who opposed the death penalty and supported abortion rights.

Garland, 63, worked for the Department of Justice where he took on some of the most difficult anti-terrorism cases in U.S. history. In the wake of the Oklahoma City bombing, he led the investigation and prosecution of Timothy McVeigh.

According to the White House, he has cultivated a reputation as a brilliant, meticulous judge with a knack for building consensus, playing it straight and deciding every case based on what the law requires.

Garland has said, "The role of the court is to apply the law to the facts of the case before it — not to legislate, not to arrogate to itself the executive power, not to hand down advisory opinions on the issues of the day," according to the White House.

The Senate has never allowed a term-limited president to fill a Supreme Court vacancy this late in his term, Hatch said in a prepared statement.

The vacancy is the third in nearly a century to occur after the public had already started voting for the next president. In the previous two instances, in 1956 and 1968, the Senate did not confirm a nominee until the year after the presidential election.