"Donald Trump is a phony, a fraud," Romney told a standing room-only crowd that included national media outlets gathered for the U.'s Hinckley Institute of Politics address on the state of the 2016 race delivered in Libby Gardner Hall.

Romney called Trump's promises "as worthless as a degree from Trump University. He's playing the members of the American public for suckers: He gets a free ride to the White House, and all we get is a lousy hat."

"Whoa!" someone in the crowd yelled as others applauded.

Romney, the GOP's presidential nominee in 2012, offered some of the toughest ammunition yet from the establishment wing of the Republican Party against the billionaire business mogul and reality TV star.

He had already gone after Trump in recent interviews and on social media, suggesting there is a potential "bombshell" in Trump's unreleased tax returns. On Thursday, Romney went much further.

Sounding a little like a candidate again, Romney cautioned that if "we Republicans choose Donald Trump as our nominee, the prospects for a safe and prosperous future are greatly diminished."

He referred to Trump's statements that Muslims should be banned from entering the United States, warning his "bombast is already alarming our allies and fueling the enmity of our enemies."

And Romney went on, slamming Trump's "personal qualities, the bullying, the greed, the showing off, the misogyny, the absurd third-grade theatrics," including bragging about his marital affairs and use of vulgarities.

Trump's response to the speech, Romney told his audience, "may tell you what you need to know about his temperament, his stability, and his suitability to be president."

Within hours, Trump was lambasting Romney again and again at a campaign rally in Portland, Maine, telling supporters "you can see how loyal he is. He was begging for my endorsement" in 2012.

"I could have said, 'Mitt, drop to your knees.' He would have dropped to his knees," Trump said, adding that Romney "let us down" by not campaigning more aggressively four years ago against President Barack Obama.

If Trump had said 4 years ago the things he says today about the KKK, Muslims, Mexicans, disabled, I would NOT have accepted his endorsement

In a long and sometimes rambling talk, Trump labeled Romney a "choke artist" and took credit for keeping him out of the 2016 race.

"I will tell you the real reason Mitt chickened out: It was me," Trump said.

Romney did not mention whether he sought and received Trump's endorsement four years ago in his speech, but later posted on Twitter: "If Trump had said 4 years ago the things he says today about the KKK, Muslims, Mexicans, disabled, I would NOT have accepted his endorsement."

Romney started his speech amid cheers and a standing ovation by saying he was not announcing his candidacy nor endorsing one of the other Republicans still in the race, Texas Sen. Ted Cruz, Florida Sen. Marco Rubio and Ohio Gov. John Kasich.

"One of these men should be our nominee," Romney said, because "the only serious policy proposals that deal with the broad range of national challenges we confront" are coming from them.

He said he would vote for Rubio in Florida and Kasich in Ohio on March 15, and for Cruz "or whichever one of the other two contenders has the best chance of beating Mr. Trump" in other states, a scenario that likely will lead to a brokered convention.

Jason Perry, the head of the Hinckley Institute, said Romney may not be out of the running if none of the candidates have enough delegates to secure the nomination before the Republican National Convention in July.

"It will be interesting to see what impact this has on the delegates coming up and the public going forward," Perry said. If Trump is "neutralized so no one is really getting enough votes, it certainly opens the door for someone like Mitt Romney."

Kirk Jowers, a longtime Romney friend and supporter, said that door may have slammed shut with Thursday's speech.

"The safer path for Romney certainly would have been to keep his head down and let the 'Draft Mitt' movement continue to build than to stick his neck out," Jowers said. "He's content now to let the other candidates work as hard as they can."

He says the same thing to me in private as he has in public. He's had a lot of people encourage him, and he continues to say what he has said from the beginning.

Former Utah Gov. Mike Leavitt said Romney isn't interested in becoming a candidate. Romney, who also ran for president in 2008, toyed briefly with the idea of getting in the race more than a year ago before deciding against another campaign.

"He says the same thing to me in private as he has in public," said Leavitt, a top adviser to Romney's 2012 campaign. "He's had a lot of people encourage him, and he continues to say what he has said from the beginning."

"I thought it was a courageous speech because he will endure a lot of criticism," he said. "But this is a man who is not running for anything who is speaking his mind out of conscience and out of sincere loyalty to his country and his party."

Trump may be the primary season's big winner so far, but he has languished in fourth place in recent Utah polls, behind "Don't Know." Some Utah GOP officials aren't convinced he'll participate in the GOP's March 21 debate in Salt Lake City.

One of Trump's Utah supporters, Senate Majority Leader Ralph Okerlund, R-Monroe, said he supported Romney in 2012 and wishes he were in the race this year. He said he's not surprised the party's establishment is resisting an outsider.

"I don't agree with everything that Donald Trump says and does by any means, but I still think an outsider's viewpoints on a presidential race are going to be helpful," Okerlund said.

Don Peay, a leader of a Utah group backing Trump that he said is not sanctioned by the campaign, discounted the impact of Romney's remarks.

"Mitt said the people voting for Trump have been duped. So does that mean we're stupid?" asked Peay, who recently introduced Donald Trump Jr. to many Utah Republican leaders. 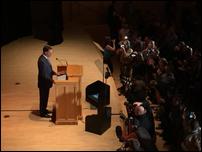 RELATED: Full text of Mitt Romney speech at the Hinckley Institute of Politics

On Thursday, former governor of Massachusetts Mitt Romney addressed the Hinckley Institute of Politics at the University of Utah on the state of the 2016 presidential race. This is a full transcript of the remarks.

Trump supporters like him because he speaks their language, Peay said, while Romney and other establishment Republicans are tone-deaf to the working class. Romney's tirade against Trump, he said, will only help Trump.

"Sometimes it's refreshing. It comes unfiltered, and sometimes you think, 'Did he really say that?'" Herbert said. "And he certainly doesn't lack for self-confidence. We all should have he same kind of self confidence as a Donald Trump. But sometimes he's a little bit blustery, and that's a bit off-putting to me."

'I understand the anger'

Romney's nearly 20-minute speech was briefly interrupted several times by hecklers, who were drowned out by cheers and chants for Romney.

One of the many times Romney received applause was when he said a Trump nomination means a win for the leading Democratic candidate, former Secretary of State Hillary Clinton, and "a person so untrustworthy and dishonest as Hillary Clinton must not become president."

He said that under Secretary Clinton, "America's interests were diminished in every corner of the world. She compromised our national secrets, dissembled to the families of the slain, and jettisoned her most profound beliefs to gain presidential power."

(Trump's) domestic policies would lead to recession. His foreign policies would make America and the world less safe. ... And his personal qualities would mean that America would cease to be a shining city on a hill.

Most of his speech, however, was devoted to detailing what he sees as Trump's deficiencies as a candidate. Nothing was spared in Romney's critique, which even included suggesting Trump is not the "business genius" he claims to be.

"There are a number of people who claim that Mr. Trump is a con man, a fake. There is indeed evidence of that," Romney said, citing the controversy surrounding how long it took Trump to disavow the support of the Ku Klux Klan.

"I understand the anger Americans feel today," Romney said. "In the past, our presidents have channeled that anger and forged it into resolve, into endurance and high purpose and into the will to defeat the enemies of freedom."

Trump is directing that anger "for less than noble purposes," Romney said.

"His domestic policies would lead to recession. His foreign policies would make America and the world less safe. He has neither the temperament nor the judgment to be president. And his personal qualities would mean that America would cease to be a shining city on a hill."

Romney ended his speech by invoking the late President Ronald Reagan: "America has greatness ahead. This is a time for choosing. God bless us to choose a nominee who will make that vision a reality."

Read the full text of the speech here.