PROVO — Thirty-seven girls gathered in two separate rooms this week, armed with laptops, headphones — and most importantly snacks — ready to learn about coding.

"I may be a coder, but I probably am going to be a rock star," 8-year-old Faith Anderson of Spanish Fork said about her future career in technology. That proclamation came after extensively talking about her other passion — Disney princesses. Rapunzel is her favorite.

As an effort to promote science, technology, engineering and mathematics career paths for women, InsideSales.com conducted its first ever coding camp for girls ages 7 to 14.

"They have been learning how to write software, how to solve problems, how to break things down into discrete chunks that you can actually code," explained Mike Plante, senior vice president of human resources at InsideSales.com.

During the beginning of the week, the girls completed a standardized test to decide their placement into either the beginning or intermediate coding group — which effectively split the girls into a younger and older group.

Despite age differences, the curriculum taught to both groups at Code Camp is similar, albeit taught at different paces.

Outcome goals, taught by volunteer employees, include learning about algorithms, iteration, building their own web pages and safe Internet practices, through resources that can be accessed by participants at home.

"Scratch is my favorite activity, because I made penguins do stuff; they were on the beach and then on icebergs," said Grace McCaren, 12, from American Fork, describing an online program that allows users to create their own short animated films using codes. 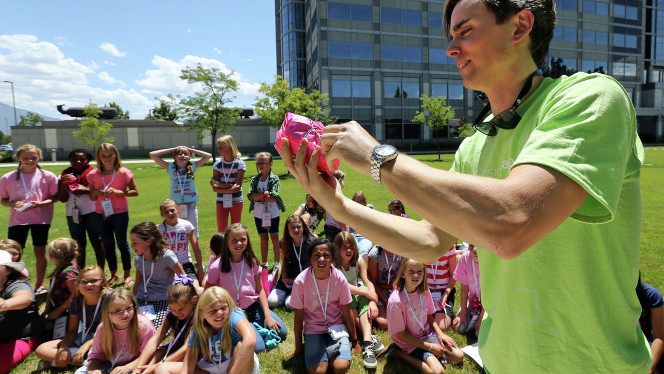 Several girls claimed Scratch as their favorite part of Code Camp, and they were able to show their parents the movies they created in a matinee showing with popcorn.

"The thing that's amazing about this, that I really enjoy, is that they don't have any preconceived ideas about what they can and can't learn," said Pert Eilers, project manager at InsideSales.com.

Eilers also believes coding is a great way to teach girls that there is no such thing as failing and to fear trying new things where failure is possible, because instead of considering setbacks as failures, setbacks become opportunities to try an activity again, knowing more about the pending problem.

Surprisingly, even the youngest participants of Code Camp can define and remember what non-coders may consider advance terms. When asked what an algorithm is, 7-year-old Kinsey Call, of Harriman, yelled excitedly, "It's a set of instructions!"

Besides being a rock star or a coder, other career choices the participants are considering include careers in architecture, marine biology, engineering, writing, teaching, artistry or unique combinations of two to three diverse career fields.

Code Camp is a pilot program under the company's philanthropic arm known as the Do Good Foundation — which advocates for companies to adopt a 1-1-1 campaign by giving 1 percent of their time, product and revenue back to the community.

This year's attendees were exclusively family members of company employees, but it's likely the camp will be open to the public next year, said Tema Laussen, executive director of the Do Good Foundation, adding that coding is a great career for women because coding is possible in either an office or at home.

Cassidy Hansen is currently studying both Political Science and Communications at Brigham Young University, while working as an intern at the Deseret News. Contact her at chansen@deseretnews.com