2014: Christopher Lee on how he chooses roles

LONDON (AP) — Christopher Lee, an actor who brought dramatic gravitas and aristocratic bearing to screen villains from Dracula to the wicked wizard Saruman in "The Lord of the Rings" trilogy, has died at age 93.

Lee appeared in more than 250 movies, taking on memorable roles such as the James Bond enemy Scaramanga and the evil Count Dooku in two "Star Wars" prequels.

But for many, he will forever be known as the vampire Count Dracula in a slew of gory, gothic British "Hammer Horror" thrillers churned out in the 1950s and 1960s that became hugely popular around the world.

He railed against the typecasting, however, and ultimately the sheer number and range of his roles — including Sherlock Holmes and the founder of Pakistan — secured his place in film history.

"I didn't have dreams of being a romantic leading man," Lee told The Associated Press in 2002. "But I dreamed of being a character actor, which I am."

The Royal Borough of Kensington and Chelsea in London on Thursday issued a statement confirming that Lee died June 7. Lee's agent said his family declined to comment or provide more details.

Christopher Frank Carandini Lee was born in London on May 27, 1922. His father was a British army officer who had served in the Boer War and his mother was Contessa Estelle Marie Carandini di Sarzano. His parents separated when he was young, and his mother later remarried Harcourt Rose, the uncle of James Bond creator Ian Fleming.

Lee attended Wellington College, an elite boarding school, and joined the Royal Air Force during World War II. Poor eyesight prevented him from becoming a pilot, and he served as an intelligence officer in North Africa and Italy. 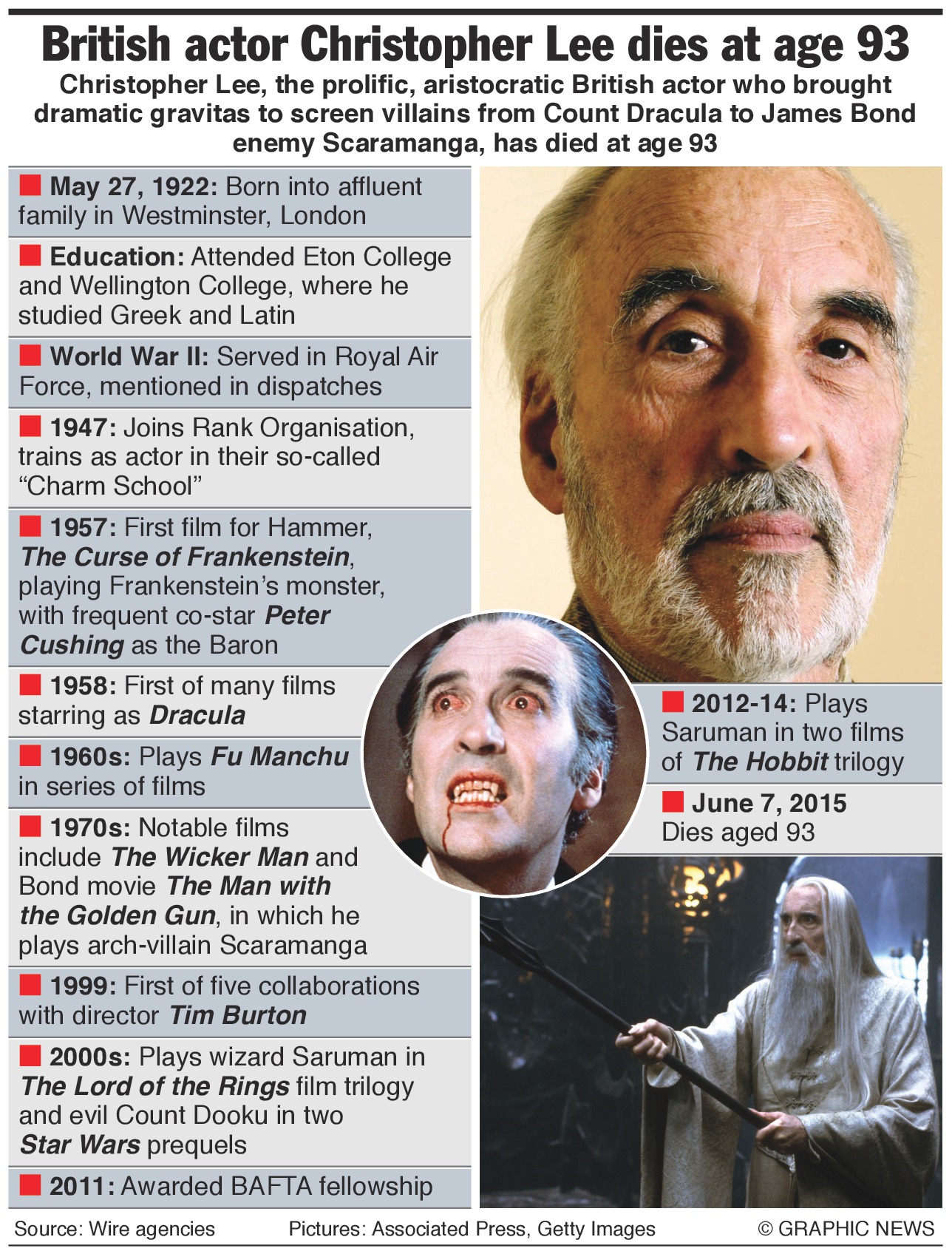 After the war, the 6-foot-4 (1.93-meter) Lee was signed to a contract with Britain's Rank studio, and spent the next decade playing minor roles in a series of formulaic pictures. He also appeared briefly in Laurence Olivier's "Hamlet" in 1948 along with his future Hammer co-star, Peter Cushing.

He launched his horror career in 1957, starring as the monster in Hammer's "The Curse of Frankenstein." In 1958, Lee made his first appearance as the famous vampire in "Dracula," opposite Cushing's Van Helsing.

Film critic Matthew Sweet said Lee brought a sensuality to the role that fit with the newly permissive times. While Bela Lugosi, the definitive 1930s Dracula, "postures and glides, Lee is rough and muscular," Sweet wrote in 2007.

"Lee's performance convinced a generation of scholars that Dracula was a book about sex, and not about vampires," Sweet said.

Lee went on to play the Transylvanian vampire in sequels including "Dracula: Prince of Darkness," ''Dracula Has Risen From the Grave," ''Taste the Blood of Dracula," ''Scars of Dracula" and "Dracula A.D. 1972" — an ill-advised attempt to update the series to 1970s London.

Lee was wary of being typecast, and later said the studio practically blackmailed him into continuing to appear.

He held out for eight years after the first Dracula film before appearing in "Dracula: Prince of Darkness," in which he stars but has no lines.

In 2006, Lee told the BBC that his reaction to reading the script for the film was, "I'm not saying any of these lines. It's impossible. They're ridiculous."

During this period, Lee played non-vampiric roles in Hammer's "The Devil Rides Out," ''The Mummy," ''Rasputin, the Mad Monk" and "The Hound of the Baskervilles," and starred as mustachioed master criminal Fu Manchu in a series of low-budget thrillers. His last film for Hammer was "To the Devil a Daughter" in 1976.

Starting in the 1970s, Lee tried to shake off the Hammer mantle. He played the villain in "The Man With the Golden Gun" and appeared in non-Hammer horror films. The most distinguished was 1973's "The Wicker Man," a cult classic in which Lee played the lord of a Scottish pagan community troubled by the appearance of an inquisitive police officer.

Lee appeared in so many movies that he acknowledged he couldn't remember them all.

An energetic man who listed his hobbies in "Who's Who" as "travel, opera, golf, cricket," Lee never retired. His career flourished late in life, with roles in some of the best-loved of film franchises. He also branched out into music, and released a heavy metal album to mark his 92nd birthday just last year.

Eva Juel Hammerich, a producer in Copenhagen, Denmark, who was expecting to film with Lee later this year, said she was shocked at the loss.

"Honestly we don't know what to do," she said. "You can find another person to interpret a role but it will be done in a different way."

The actor became Sir Christopher Lee when he was knighted in October 2009, receiving the honor from Prince Charles at Buckingham Palace.

Lee said at that time that "although I've played a lot of bad guys, there's more scope than being the man in the white hat."

Lee also appeared in several films by Tim Burton, including "Sleepy Hollow" and "Charlie and the Chocolate Factory," and was proud of his turn as Pakistan's founder, Muhammad Ali Jinnah, in "Jinnah."

Lee felt his gift for comedy was under-appreciated. He was proud to have hosted the popular U.S. sketch show "Saturday Night Live" in 1978 and told the BBC that his greatest regret was turning down the part that went to Leslie Nielsen in the slapstick comedy "Airplane."

"A lot of people, including the casting directors, have no idea that when I lived in America half of the films I did were comedies," he said in 2006. "They have no idea that I hosted 'Saturday Night Live.' They don't seem to be interested."

Lee married Birgit Kroencke in 1961. Their daughter, Christina, was born in 1963.

Jan M. Olsen in Copenhagen, Denmark, contributed to this report

This story has been corrected to show that Lee was 1.93 meters, not 1.83 meters.