A deeper look inside the historic Granite Stake Tabernacle

SUGARHOUSE — The Glory of God is Intelligence: This statement, painted at the back of the chapel in the Granite Stake Tabernacle and covered over for many years, was revealed again when the building was restored in 1989, and shines down, once more, on the congregation.

The Granite Stake Tabernacle is a place of unusual beauty and is filled with great love. After being marooned, and suffering some damage in the floods of 1983, it was proposed by leaders with The Church of Jesus Christ of Latter-day Saints that the tabernacle should be demolished.

Clarence Walker, the stake president at the time and stake patriarch until his death in 2013, stated in a video that he urged the LDS Church to preserve it, saying, “Over my dead body. We love this place.”

It was decided, therefore, to keep the building, a rare concession to those who loved the tabernacle and wished to see it preserved.

The Granite Stake Tabernacle was designed by Edward O. Anderson and Lorenzo Snow Young, who also collaborated on Kingsbury Hall at the University of Utah.

The corner stone was put in place in September 1929 and was completed roughly six months later. According to an LDS Church News article by Elayne Wells, it was not dedicated for another eight years, because they wanted the building to be paid in full, and that was a difficult task in the middle of the Great Depression.

The tabernacle was built in a Byzantine-inspired design and has beautiful features on the interior as well, including gently domed ceilings and murals in the chapel as well as exquisite woodwork. 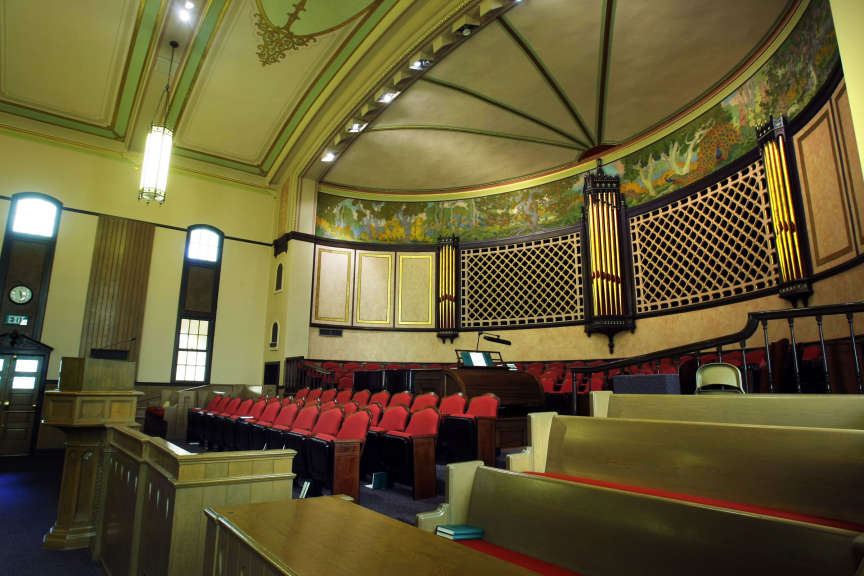 Walker tells many fabulous stories of the history of the building. In 1951, the First Presidency of the LDS Church requested that a chapel be built onto the tabernacle, enabling more people to meet and the church to save a large sum of money. The chapel was built carefully, in order to match the design of the tabernacle. Unable to find a suitable craftsman, they called in the original mason, a man of 80 at the time, and he assembled a team and completed the job.

In addition to the built-in fireplaces, the ornamentation and beauty, it is also home to some of the belongings of famous silent film star and co-founder of United Artists, Mary Pickford. Furnishings from her estate were purchased by the church, including her Steinway piano, Walker said.

Walker described the tabernacle as the core of the lives of those who met and worshipped there, including a young Heber J. Grant, who would practice his singing early in the morning, and the two congregations who meet there today. Because of this love and dedication, it can continue to inspire and bless the lives of those who call it their spiritual home.

Know of a religious building in Utah with an interesting history? Email the LDS Life editor, Megan Christensen at mchristensen@ksl.com.

Mairi McCloud is a graduate of the University of Glasgow and is now living in Utah.