DRAPER — A wind-fueled fire ripped through a large home in Draper Monday, causing an estimated $1 million to $2 million in damage.

The home, near 2100 East and Pioneer Road, is owned by the CEO of the Ralph L. Wadsworth Company, one of the state's largest construction companies.

After he got up to find out what was happening, he found his garage was full of smoke. The family safely got out of the house. As firefighters were driving toward the fire, they could see a large plume of smoke coming from the 6,000-square-foot home and immediately called for a second alarm, Morley said.

More than 35 firefighters responded to the large structure fire.

The two biggest challenges for firefighters were strong winds and access to the house that sat about 200 feet off the main road, he said. The wind quickly pushed the fire from the garage up into the attic.

"It played a pretty significant factor. It extended up into the eaves and just ran and ran in the attic from there," Morley said.

The structure was more of a "commercially built home" with heavy structural timbers not normally seen in average home construction, he said. That caused additional problems for crews because of the heavy fire load.

As of noon, more than seven hours after the fire started, firefighters were still putting out hot spots. 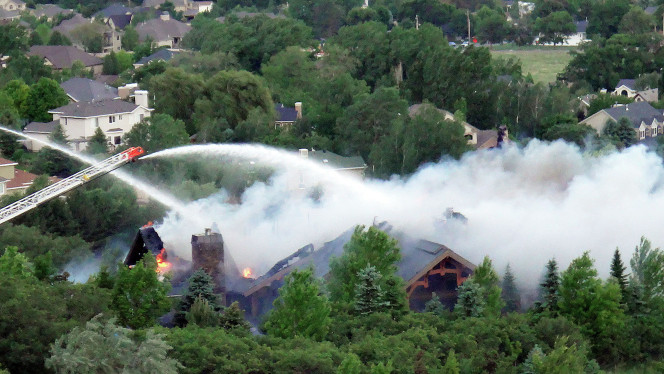 Firefighters work at the scene of a house fire in Draper, Monday, June 1, 2015. (Photo: Rebecca Dunn)

Neighbors said the Wadsworth family is in shock but feels fortunate that everyone is safe.

"I can't imagine losing everything. It's just got to be almost devastating," said neighbor Rebecca Dunn.

Wadsworth went back into the house before firefighters arrived to try to save as many personal items as he could, Morley said. Fire crews had to stop him from running back in again once they arrived. Several hours later, they allowed him to retrieve more items.

Crews were forced to go into a defensive mode, meaning they only attacked the fire from the outside of the house. The home is considered a complete loss, Morley said.

The fire is believed to be accidental. It is believed to have started in a utility room adjacent to the garage. The exact cause was still under investigation Monday.