SALT LAKE CITY — More than a dozen lengthy environmental plans were unveiled Thursday by the federal government to protect the greater sage grouse in Utah and nine other Western states, constituting the largest effort ever undertaken to protect a single species.

The unprecedented effort covers 4 million acres in a Utah-specific plan for the chicken-sized bird that is facing a multitude of threats to its West-wide range.

The 14 final environmental impact statements were crafted after years of analysis by the Bureau of Land Management in cooperation with the U.S. Forest Service with an aim of instituting protections so the bird is not added to the endangered species list.

“The West is rapidly changing — with increasingly intense wildfires, invasive species and development altering the sagebrush landscape and threatening wildlife, ranching and our outdoor heritage,” she said.

“As land managers of two-thirds of greater sage grouse habitat, we have a responsibility to take action that ensures a bright future for wildlife and a thriving Western economy. Together with conservation efforts from states and private landowners, we are laying an important foundation to save the disappearing sagebrush landscape of the American West.”

The plans will undergo a 60-day consistency review by state governors and a concurrent 30-day protest period, after which the agencies will release a final decision.

In Utah, the plans identify 583,000 acres as general habitat and 2.7 million acres as priority habitat — lands with the most value for maintaining "sustainable" sage grouse populations. Within priority habitat, 228,500 acres have been identified as sagebrush focal areas — or stronghold areas essential for the species' survival. Less than 1 percent of the land in Utah — or 228,500 acres — have been classified as a focal area.

As land managers of two-thirds of greater sage grouse habitat, we have a responsibility to take action that ensures a bright future for wildlife and a thriving Western economy. Together with conservation efforts from states and private landowners, we are laying an important foundation to save the disappearing sagebrush landscape of the American West.

“We will continue to work with our state and local partners with the shared goal of establishing strong science-based management and conservation commitments across the range of the bird that allow the Fish and Wildlife Service to conclude the protections of the Endangered Species Act are not needed for the greater sage grouse,” said Jenna Whitlock, BLM-Utah acting state director.

A BLM-produced primer on the Utah plan notes that 55 percent of the bird's habitat occurs on federal land, but the conservation effort is specifically targeting the animal's highly fragmented populations, not just landscapes.

Federal agencies stress that all existing rights for coal mining, oil and gas activity, and solar and wind energy production are recognized under the plans.

• 15 percent of priority habitat has oil and gas leases, with 1 percent in production.

• 1 percent of priority habitat has coal mining activity, but most are underground coal mines with limited impact to the bird.

• 4 percent of priority habitat includes approved rights-of-way for wind energy production, with no projects that have reached development stage.

Of the 8.3 million acres of high and medium oil potential in Utah, an estimated 39,000 acres will be subject to the plan's priority habitat management restrictions, according to the BLM.

Rep. Rob Bishop, R-Utah, chairman of the House Natural Resources Committee, immediately panned the land-use plans, arguing that the federal government should have deferred to state plans already in place.

"The state plans work," Bishop said. "This proposal is only about controlling land, not saving the bird."

His concerns were echoed by the Western Energy Alliance, a nonprofit trade association for oil and gas producers in the West.

"Conservation of the sage grouse is a goal shared by the oil and natural gas industry, ranchers, other industries, states, and communities across the West,” said Kathleen Sgamma, vice president of government and public affairs at Western Energy Alliance.

“That goal is best achieved at the state level, not with a one-size-fits-all federal approach. Western Energy Alliance will protest all land-use plan amendments that fail to conform with state plans and will continue to support actions by Congress to delay these land-use plans and a final listing decision,” Sgamma said. 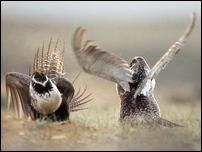 As the angst continues to build over a possible endangered species listing of the greater sage grouse, only one thing is readily apparent in the boisterous debate: It will get much louder before the federal government announces its decision. (Photo: Jerret Raffety/AP Photo)

The plans address issues identified by the U.S. Fish and Wildlife Service in 2010 that threaten the sagebrush steppe landscape, including fire, invasive species and encroaching development.

Sage grouse, once numbering in the millions, have lost 56 percent of their range in 11 Western states and have been reduced to about a half-million birds.

Although the U.S. Fish and Wildlife Service declared in 2010 that continued habitat fragmentation was imperiling the bird's existence, it was precluded from invoking federal protections for the species due to higher priorities. It is facing a Sept. 30 deadline to revisit that decision.

Multiple groups say the federal land-use management plans — rather than being a slap at existing state plans — will ultimately help prevent a listing.

"This strategy is about replacing gridlock with hope. It’s about replacing the specter of extinction with the promise of collaboration,” said Mike Daulton, Audubon vice president for government relations. “If we’re going to avoid having to put the sage grouse on the endangered species list, the federal government, the states and private landowners all have to do their parts. This plan is the federal government’s commitment to do its part. … It's about making the West work for people and for wildlife alike.”

Some groups said the plans failed to go far enough — the Western Watersheds Project criticized the lack of livestock grazing reductions — but other organizations praised the federal government for its landscape level approach to species conservation.

"The sage grouse's listing under the Endangered Species Act is an outcome from which no one stands to gain, least of all public lands sportsmen," said Land Tawney, executive director of Backcountry Hunters & Anglers.

"The vast expanses of sagebrush landscape frequented by the grouse form the backbone of habitat for hundreds of species of fish and game. Our opportunities to pursue elk, mule deer and pronghorn — and access the types of outdoor experiences that form the heart of who we are as backcountry hunters — would be severely curtailed, if not eliminated, should grouse and their habitat continue to decline. We will redouble our efforts to prevent this from happening."