WASHINGTON (CNN) — Civil rights and privacy advocates are urging lawmakers and police departments to consider the risks of over-surveillance and profiling of citizens that body cameras pose before using them more widely.

A set of guidelines released by civil liberties groups on Friday calls for policymakers and public safety officials to limit the use of facial-recognition software and prohibit police officers from viewing body camera footage before filing their reports.

At the same time, the guidelines' authors — a coalition of more than two dozen organizations including the NAACP and ACLU — argue that the footage that is obtained should be widely available for public and media review rather than remain solely under police control.

The recommendations come amid increasing calls for police to wear body cameras to provide oversight of officers. The calls follow accusations of police brutality in several high-profile cases.

The Justice Department has said it would allocate $20 million in grants for police departments to buy body cameras, and House Republicans this week proposed setting aside $15 million for the technology.

With federal money starting to flow into the system, privacy and civil rights advocates say the time to consider exactly how body cameras will be used is now. 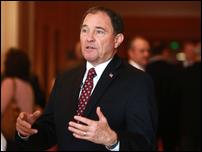 "With everything that has gone on nationally in the last six months, which has been horrifying and astounding, there's been a rush to put body cameras in the field," said Chad Marlow, the advocacy and policy counsel at the ACLU. "Right now the policies behind body cameras are all over the place."

The coalition is particularly concerned about facial recognition software because it can be akin to profiling — allowing police to identify a former convict, for instance, before there's any reason to suspect him or her of wrongdoing.

They are also worried about the control that police will exert over the footage that's recorded. They oppose allowing officers to review the film before filing their reports because of concerns officers will adapt their reports to reflect what's in the video rather than what they actually saw.

And then there is the difficult issue of who should be able to see the videos.

While the proposed guidelines say police departments should have "privacy safeguards in place" when releasing video to protect revealing details about suspects and victims, they also suggest allowing the press and the public to view upon request footage that captures police use of force.

They also suggest making footage available "to any filmed subject seeking to file a complaint, to criminal defendants, and to the next-of-kin of anyone whose death is related to the events captured on video."

But lawmakers in at least 15 states and the District of Columbia have introduced legislation that would limit the public's access to videos.

With everything that has gone on nationally in the last six months, which has been horrifying and astounding, there's been a rush to put body cameras in the field. Right now the policies behind body cameras are all over the place.

Washington D.C. Police Chief Cathy Lanier recently cautioned that the video footage will capture a broad range of information — including police communications, passwords and interiors of private residences — that would need to be redacted before releasing video.

"It's going to be very costly and time-consuming," Lanier said in public remarks at a forum on the issue.

The coalition is aware, too, of the potentially massive undertaking widespread use of body cameras would entail, include the hefty resources needed to manage their use.

Chris Calabrese, policy director at the Center for Democracy and Technology, a group in the coalition, pointed to "millions of hours of video footage" that will need to be stored and analyzed.

"The infrastructure necessary to do this right is significant," he said. "It's not just a question of buying a video camera — it's an entire system that has to be implemented and implemented correctly."