SPRINGVILLE — Val Littleton has always loved Nepal. She has the magnets on her fridge and the pictures on her wall.

She also has memories that just won't go away.

"I have dreams about it,” said Littleton in her Springville home Thursday afternoon. “In fact, I woke up with a dream even today about it and just about being there and having the earthquake."

Littleton was there last month on a suspension bridge when it started swaying.

"It didn't even occur to me that it was an earthquake and then Apa started yelling for us to get off the bridge, and so we ran off, and by the time we all got off, then we started seeing landslides and things kind of crumbling,” said Littleton.

She was there, along with Apa Sherpa, doing humanitarian work with the Apa Sherpa Foundation.

Their plan was to bring supplies for schoolchildren in Apa’s home village of Thame. The earthquake, however, changed all that.

"Two back-to-back, but the aftershock we were in was a 6.8,” said Littleton.

She suffered a knee injury after one of the aftershocks.

“We were running out of a teahouse and I slid and fell on that knee,” said Littleton. 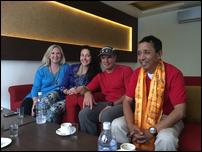 Just before their trek in Nepal began, Apa Sherpa's group of four hikers stopped to have their flags blessed in a traditional ceremony. But early this morning, everything changed. Andrew Riddle got the kind of phone call from his daughter no parent ever wants to get. "She told us they just had this massive earthquake. Her voice was very shaky and she was scared," he said.

She and Alexis Riddle of Cottonwood Heights, who became sick, were eventually evacuated back to Utah.

“I feel guilty about that. I really do. Because those people have nothing and I was able to leave,” said Littleton.

However, she is getting a lot of support back home in Springville. During the interview, a neighbor rang the doorbell to give Littleton a card and chocolates.

"I've kind of been overwhelmed with the support of our community and my family and friends, and this is a perfect example of that,” said Littleton.

"It's overwhelming to me how much help they need right now,” said Littleton.

Apa Sherpa and Todd Winzenreid, the other member of their four-person mission to Nepal, are due to return to Utah Thursday evening.

The group is hoping to raise money through the Apa Sherpa Foundation to assist those in Nepal affected by the earthquake.