BYU football may require step back, and hope for steps forward

PROVO — We all know the story. Utah and TCU left the Mountain West Conference in search of greener pastures. The Pac-10, soon to be the Pac-12, offered multimillion-dollar television contracts, marquee matchups both home and away, and future safety in a changing football landscape.

The Big East, looking to expand westward wanted BYU, and BYU had interest in the Big East. BYU was an independent, leaving the Mountain West Conference after TCU and Utah bolted for a better deal. The holdup between BYU and the Big East came in the form of television rights as BYU reportedly wanted to hold onto the rights to broadcast its home games, while no other school in the Big East had such a deal. That was in 2011, BYU and the Big East never came to an agreement, and the conference eliminated football in 2013.

The former teams that made up the Big East have found conferences since the original grouping was disbanded, while BYU has not.

Until recently, BYU appeared poised to remain as an independent member, waiting for a needy Power-5 conference to come calling when it needed to adopt an additional member. And until recently, it appeared like that might be a possibility. BYU ran into a best-case scenario with the Big-12, the most commonly mentioned landing spot among Power-5 conferences, when the Big-12 was left out of the inaugural College Football Playoff, despite having two worthy teams in Baylor and TCU. It appeared on the outside that the Big-12 was being punished for lacking a true conference title game, having seen the title game winners from the four other Power-5 conferences getting invites to the College Football Playoff.

The hope for Cougars fans was that the Big-12 would see the need for expansion, as the NCAA requires 12 conference teams in order to support a conference title game, making BYU an obvious choice with its national brand. That was until CBS Sports reported that the NCAA would likely relax the regulations on conference title games by 2016, opening up the option to host a title game with only 10 teams. 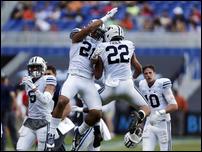 The gap between student and athlete just took a gigantic step. Some argue that it's the wrong direction and others that it was an inevitable one, but on Aug. 1, 2015, institutions will start paying for more than just school.

Bob Bowlsby, the Big-12 commissioner, announced last week that the conference isn’t pursuing a title game, and has no interest in expansion. This severely narrows BYU’s chances of moving into the Big-12 in the immediate future. Instead the Cougars must now hope for Power-5 expansion through another conference, a move that appears unlikely for some time.

BYU’s independent schedules have been looking more sustainable of late, with the Cougars announcing future football meetings with LSU, Michigan, UCLA, Michigan State, Missouri and Mississippi State, among others in the near future. This was until head coach Bronco Mendenhall stated in April that independence was only sustainable financially for roughly another three seasons. Athletic director Tom Holmoe has hinted at a similar financial deadline.

So where does BYU go from here?

Its television deal with ESPN is due to expire in 2018, with the network holding an option for an additional season. As valuable as the relationship is with ESPN, which has helped BYU broker football series with future opponents, it doesn’t rival the television contracts of the Power-5 conferences. BYU may find itself negotiating from a position of little leverage, with no bargaining help from any conference allies as an independent. BYU is unlikely to close the financial gap simply by extending its deal with ESPN.

The Cougars could find added contractual value if another network decided to make a splash by jumping into the college football market, forcing a bidding war between two or more network for BYU’s broadcasting rights, but again, that is unlikely to provide the money needed to compete with the nation’s top football programs.

BYU’s best option may be to try to re-create recent history, a history it helped form as a member of the Mountain West Conference. As a member of the conference, BYU watched Utah and TCU participate in multiple BCS bowl games, helping those teams gain national recognition as one of the strongest opponents during their undefeated bowl runs. Though BYU never made it to a BCS game, it played a role in two conference opponents success.

In the inaugural College Football Playoff, the Mountain West again saw national success by sending Boise State to the Fiesta Bowl, one of six high-profile bowls played on New Year's Eve or New Year's Day. Unlike Utah’s and TCU’s previous BCS appearances, Boise State made the Fiesta Bowl despite losing two games this past season, including an embarrassing midseason loss to Air Force. It’s not out of the realm of possibilities to assume BYU could find similar success in the Mountain West Conference.

Alone, Boise State, if it were to dominate the Mountain West Conference, may look like an outlier, simply beating lesser opponents in the newly reformed Mountain West. If BYU were to join the conference and trade off New Year's six bowl appearances with the Broncos, the Mountain West could reassume its former role as the top non Power-5 conference, worthy of better national recognition.

Boise State and BYU as a duo could add instant credibility to a conference hoping to beef up its in-conference strength of schedule while gaining valuable television exposure with BYU’s worldwide following. If the two schools failed to gain a Power-5 invite, BYU would at the very least have a realistic opportunity to appear in the high-exposure New Year's bowl games while easing the burden of building an independent schedule.

While rejoining the Mountain West Conference would provide BYU with no guarantees of making a move to the highly sought after Power-5 conferences, it would provide it with hope, something that appears to be fading as an independent.