Veteran Surprises Her Mother at Graduation

GAINESVILLE, Ga. (AP) — It's amazing the difference one minute can make.

At 9:41 a.m. May 2, Debra Cooper was a face in the crowd, seated among a sea of caps, gowns and tassels on the front lawn of Brenau Campus in Gainesville as she waited to receive her occupational therapy masters degree.

"Brenau is proud of its active military students, its veterans and the families of both," said University President Ed Schrader during the coeducational programs commencement. "We have lots of folks who are here today who are veterans or are even on active duty, but I'd like to especially recognize Debra Cooper."

Cooper furrowed her brow in the initial moment of surprise.

"Debra didn't know this, but her daughter, (Army Staff Sgt. Markita James), has returned from active duty in Afghanistan."

James, who had been creeping up behind mom — blocked from sight by a human shield of Brenau personnel who were in on the surprise — embraced her.

And really, she was.

Prior to the surprise visit, James, 28, explained how her mom — a Winder resident —- has always been an inspiration to her and brother, Michael Hall, 26,

"Getting this degree is a huge accomplishment for her," James said. "She's been through a lot. She's a single mother of two, but she is so strong. I'm so proud of her." 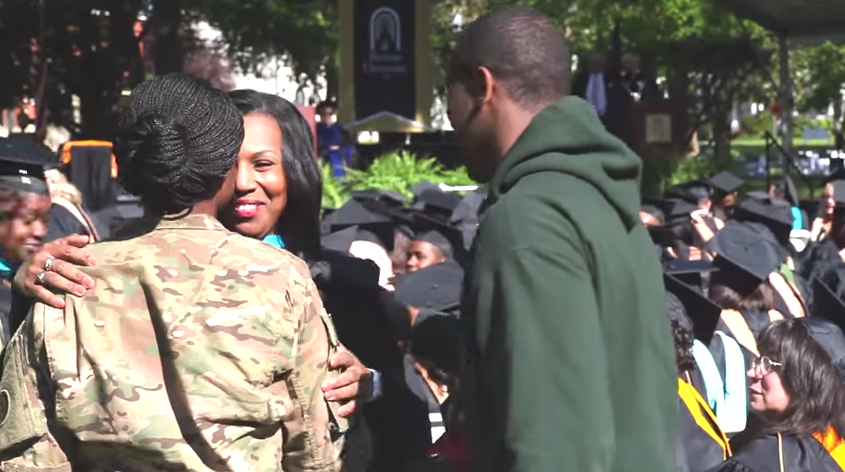 Cooper has military experience, too. She is a veteran of the Army, having served her country from the 1990s to around 2000.

James added that mom had no idea about Saturday's plan — which was orchestrated with the assistance of Brenau University staff.

"When I first found out I was going to be able to come to her graduation, I had just planned on letting her know that I was going to be there. But I was talking with someone about it, and they said maybe I should contact Brenau about it. So, I called, and they were excited about this whole idea."

"I think this is wonderful," Short said prior to commencement. "These kinds of things make our jobs worthwhile. It's an amazing moment for mother and daughter, and there won't be a dry eye in the crowd."

Indeed, the crowd was emotional as they watched the two women embrace. Cooper's son, Hall, joined them in a group hug. Like mom, he had no idea James was back. It had been nearly a year since mom and daughter had seen one another. And, the icing on the cake? Saturday was Cooper's birthday.

She hugged her daughter and son closely. Trying her best to compose herself, Cooper sat down as the commencement ceremony proceeded. During a break in the ceremony, she commented on the unexpected visit.

"I'm still trying to catch my breath," Cooper said. "I had no idea my daughter was coming. No idea. It's a miracle."

Information from: The Gainesville Times