6PM: 8-year-old girl has a new left hand thanks to a 3-D printer
Mike Anderson/KSL-TV

5PM: 8-year-old girl has a new left hand thanks to a 3-D printer
Mike Anderson/KSL-TV

She likes to jump rope and play with her siblings. But she is a little different.

She was born with an underdeveloped left hand.

“We call it a baby hand since it’s not like an original hand,” Elise said. “I tell (people) that I was born with it.”

When Elise was born, her parents were concerned about how she was going to cope and learn, and do all the things other children can do.

But they didn’t need to worry.

“She's got a really positive attitude, and she can do anything she tries,” said Holly Wright, Elise's mother. “She teaches us every day, and we wouldn't change it for anything. She's incredible."

Recently, the very determined girl got something her parents never thought she would because it cost thousands of dollars: a prosthetic left hand.

A neighbor told them about a program they saw on television about 3-D printed hands. They contacted the Helping Hand Project, started by Jeff Powell, a University of North Carolina-Chapel Hill biomedical engineering student. The idea behind his project was to create affordable prosthetic hands for children who need them.

"It's so simple. The price is low, the model is fairly simple, and it's cheap, and it's just incredible that they can do this,” Wright said. "I'm so shocked that they could make something like this.”

It took about four months for the hand to be designed, built and shipped. It cost about $70, which the charity raises for each child. It won’t take money directly from parents.

“At first when I got it, I just went through the house picking up stuff to see how it worked,” Elise said.

Inside River Heights Elementary on Friday, the second-grader wore her new left hand to school for the first time.

Even though she was doing fantastic without it, it was really neat to see her be able to have a hand for things she just otherwise couldn't do.

“This is my robot hand,” Elise said. “I got it because I don’t have a left hand.”

Her classmates thought her hand was awesome, and so does her 11-year-old sister, Lauren.

“I think it’s really cool,” Lauren said. “It makes me want to have one.”

The hand is simple. Elise said she just bends her wrist to grip items.

"Even though she was doing fantastic without it, it was really neat to see her be able to have a hand for things she just otherwise couldn't do,” said Elise's father, Cameron Wright. “There are things that she’ll dare do now that she wouldn’t have otherwise tried to accomplish before.”

For a girl who is determined and perfectly capable of doing things, the hand has opened up a whole new world of possibilities.

“Now I can do things better with it,” she said.

But as mom and dad will tell you, that purple hand will help in some situations, but Elise still plans to do a whole lot with her baby hand. 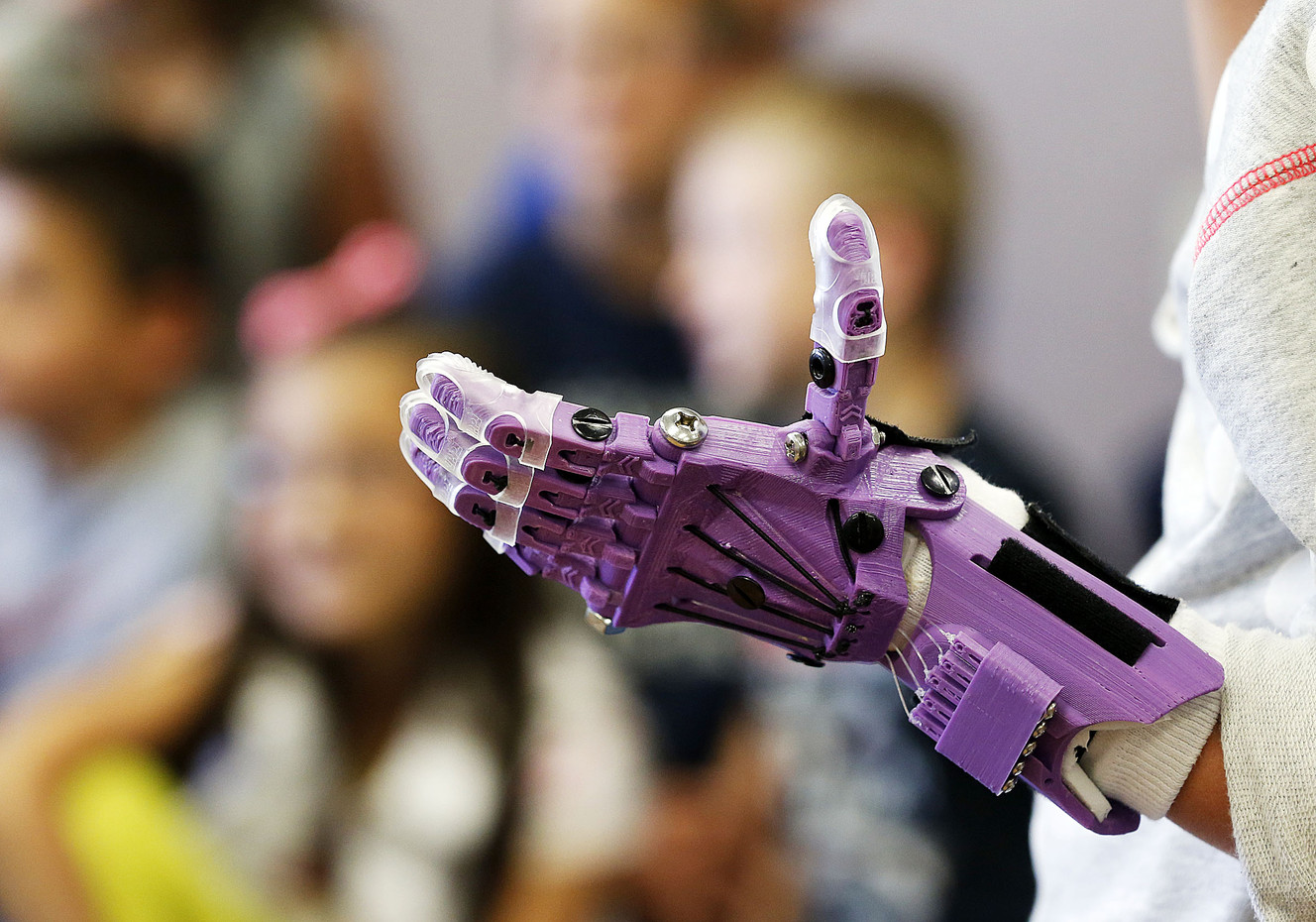 "She's the one that's always pulled through that, just like a tank,” he father said. “We’re the ones that stopped and had the issue.”

Holly Wright said the prosthetic will come in handy when her daughter needs to do those very few things that she’s not able to do.

For her birthday in March, Elise got a new bike. She was a little nervous, her dad said, because it didn’t have pedal brakes.

“Now she has the confidence of being able to pull both brakes with that hand on there,” he said. “She’s still learning. The first time she did it, it was shaky.”

While she continues to get use to her hands, she has done new things that she is happy about. When her dad asked her what her favorite thing to do with her new left hand was, she replied, “Probably get a drink and give handshakes.”