And rather than challenge Lee, former Utah Gov. Jon Huntsman Jr. has decided to join him.

Huntsman quashed stories earlier this year suggesting he might take on the first-term senator. He didn't rule out running for public office again but said it wouldn't be against Lee.

"We don't always agree — who does — but he's very capable," Huntsman told KSL in January.

Huntsman said he has known and admired Lee, who worked as his general counsel when he served as governor, for many years. He said in a statement released by the Lee campaign that the senator is at the forefront of a new generation of leaders in Washington. 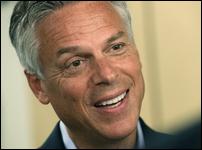 There seems to be some disagreement about Sen. Mike Lee in the Huntsman family. Utah businessman and philanthropist Jon Huntsman Sr. called the Republican senator an "embarrassment" to the state last month. On Tuesday, former Utah Gov. Jon Huntsman Jr. described Lee as "brilliant."

"Sen. Lee is working to broaden, reform and reinvigorate the Republican Party. He understands the importance of rebuilding the trust of the American people in their government, which is critical to our future success," he said.

In December, Utah businessman and philanthropist Jon Huntsman Sr. called Lee an "embarrassment" to the state in an article posted to Politico.com about the junior senator bracing for a primary challenge in 2016 from the state's political establishment.

Huntsman Sr. also described Lee as "an extremist" whose role in the government shutdown cost the Huntsman Cancer Institute millions of dollars and hurt nearby national parks.

In a January interview with a Virginia-based conservative commentator and blogger, Huntsman Jr. called Lee "brilliant" and said his father has his own view on things.

"There is immense talent in this committee and I look forward to gaining from their insight and wisdom in the days ahead," Lee said in the statement.