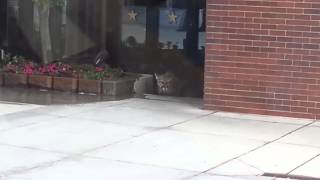 SANDY — A mountain lion created a lot of excitement around Jordan Commons on Friday morning.

Just before 8 a.m., witnesses reported seeing a cougar crossing 9400 South into the Jordan Commons area. Sandy police responded and found the animal lying down at the entrance to Ruby River Steakhouse, 85 E. 9400 South.

Workers at the Jordan Commons office tower, 9350 S. 150 East, watched the entire event unfold through their windows and took several pictures and videos with their phones.

"You could tell it was really big," said Shane Wright. "It was just in- between our buildings. In fact, one of our managers was walking up and someone yelled, 'Stay to the right. On the left is a mountain lion.'"

When the mountain lion got up, one officer fired a round at it but did not hit the animal, according to Sandy police.

"We thought it was going to take off into a neighborhood or something," said James Silva, who also watched from the office building.

The mountain lion ran east of Jordan Commons, jumped over a fence onto to the TRAX line and followed the tracks north to about 9100 South, where it hid under some bushes.

Two officers from the Department of Wildlife Resources found the mountain lion near 9100 South and 100 East about 9 a.m. and successfully sedated it with a tranquilizer gun.

It was then loaded into a crate to be taken into the mountains and released back into the wild.

"It's just crazy how big it is. You see it up high from the building and it looks big. But you see it in the back of that truck and it's just massive," Silva said.

The cougar was reportedly between 100 and 150 pounds.

"The cougar is still recovering from the effects of the tranquilizer. We will monitor her, keep her hydrated and plan to release her in the morning rather than release her later this evening."

Additional information about the mountain lion will be posted as it becomes available.