DRAPER — A man accused of causing a fatal traffic accident during an alleged drunken rampage was booked into jail over the weekend.

Thompson is accused of running a red light at on Lone Peak Parkway at 12300 South and causing a seven-car accident. Susan Madsen, 43, was struck and killed.

Prior to the fatal accident, Thompson was involved in a physical altercation with his roommate. Thompson "hit the roommate multiple times in the face with an open hand while the roommate was holding Bill's son," according to a Salt Lake County Jail report. Others who tried to help were also assaulted, the report states.

Thompson eventually left in his Chevy pickup truck and was seen by witnesses speeding down I-15.

"The white Chevy was swerving all over the roadway," the report states. 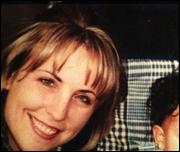 Neighbors react to death of woman in Draper accident

A man involved in a fatal multi-car crash Thursday was suspected in a domestic violence incident shortly before the crash, Draper police said.

The truck got off at Bangerter Highway and went onto Pony Express Road. Another driver, looking for RC Willey, followed, the report states. When the pickup got to the end of the dead end road on Pony Express, the other driver stopped to give Thompson room to turn around.

The frightened driver tried to escape by climbing out the passenger door. He told police that Thompson "began laughing and staring (him) down."

Thompson drove off at a high rate of speed, and was involved in the fatal collision just two minutes later.

Thompson, who was charged in Draper Justice Court with another traffic related offense in January, was also convicted of domestic violence and simple assault in 2006, according to court records.