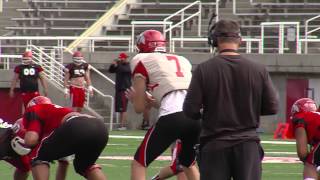 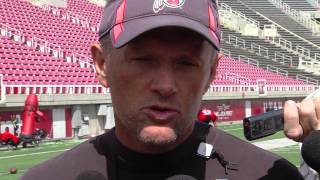 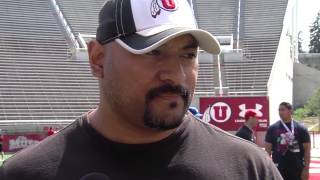 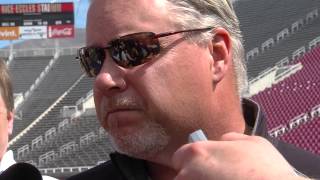 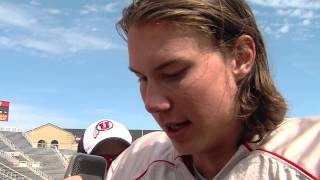 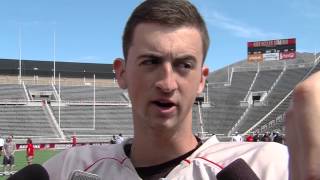 SALT LAKE CITY — Other than a showcase of speed by running back Troy McCormick and receiver Dres Anderson, the defense held the upper hand in Saturday's scrimmage.

A crowd of several thousand basking in the sun enjoyed several big plays, including a 60-yard touchdown run by the speedy McCormick, a 44-yard touchdown pass from Travis Wilson to Dres Anderson and a 29-yard fumble return for a touchdown by Hipolito Corporan.

McCormick finished with 134 yards on five carries, an average of 26.8 yards per rush, and Anderson led the receivers with eight catches for 111 yards.

The play that drew the biggest cheer came near the end of the scrimmage when Andy Phillips booted a 59-yard field goal that split the uprights down the middle and kept going for several more yards. Phillips celebrated the kick by running down the field and cart-wheeling into a back flip. Phillips also made a 41-yard field goal attempt on the first drive of the day with the No. 1 offense going against the No. 1 defense.

But the defense mostly ruled the day, batting down 13 passes, including four by Reginald Porter, and recording seven tackles for loss and two sacks (both by Pita Taumoepenu). One of the sacks came from newly converted linebacker Marcus Sanders-Williams, who had a standout scrimmage.

"Marcus Sanders-Williams went from fourth-string running back to first-string linebacker in one week," said head coach Kyle Whittingham. "The offensive coaches didn't want to lose Marcus, because he is a great blocking back and runner, but we have a greater need at linebacker."

The Utes have lost two starting linebackers already this spring in Jacoby Hale (knee) and Gionni Paul (foot). With Jason Whittingham out for the spring with a knee injury, the Utes are down to three scholarship linebackers on the roster, including Sanders-Williams. Because of the perilously thin linebacker corps, Jared Norris did not play for the defense in the scrimmage.

"We are not going to play Jared Norris (in live defensive situations) because we cannot afford to lose Jared to injury," said Whittingham.

In addition to normal playing conditions starting from the 25 and 45-yard lines, the scrimmage featured punt, kickoff, punt return, red zone, four minute and two minute situational drills. The No. 1 offense went head to head with the No. 1 defense until the very end of the scrimmage when the No. 3's took the field.

"It was a very positive day and we got a lot of work done," said Whittingham, whose team concludes spring camp next Saturday with the annual Red-White game at 1 p.m. in Rice-Eccles Stadium. "Our defense was very good in situational aspects. Our offense needs to pick up the tempo. They are not playing fast enough."

Wilson led the QBs with 184 yards and two touchdowns while completing 19-of-41 passes. Conner Manning and Adam Schulz split the No. 2 snaps, with Manning completing 9-of-12 throws for 116 yards and three touchdowns and Schulz connecting on 6-of-13 passes for 34 yards.