Teen booked in adult jail in connection with Toquerville homicide

TOQUERVILLE, Washington County — A 17-year-old was booked into an adult jail Saturday, accused of killing a woman in his neighborhood earlier this week.

Just after midnight Wednesday, authorities were tipped with a description and license plate number of a vehicle believed to be used by the perpetrators of a burglary. That vehicle was traced back to its owner, Geraldine Bommarito, 58, who was found dead inside her home from a gunshot wound. 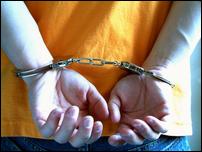 17-year-old arrested in connection with death of Toquerville woman

A 17-year-old boy was arrested in Springdale in connection with the killing of a Toquerville woman and the burglary of several weapons, police said.

Canfield was spotted that afternoon walking near Springdale and was arrested. He has not yet been formally charged. Questions about prosecutors' apparent intentions to charge him as an adult were referred to the Washington County Attorney's Office.

"Canfield will be held in segregation and will not be considered for housing in the general population until after he turns 18," Jones said in a prepared statement.

Neighbors said Canfield lived in a camp trailer just outside his parents' home and just down the street from Bommarito. Police recovered stolen firearms from another burglary in the neighborhood when the teen was arrested.