Middle-aged? Put down the meat

CNN — Eating a high-protein diet in middle age could increase your risk of diabetes and cancer, according to a study published this week in the journal Cell Metabolism. But don't stay away from meat for too long — the same study showed those over 65 need more protein to reduce their mortality risk.

Insulin-like growth factor 1, or IGF-1, is a protein in your body related to growth and development. Past studies have linked IGF-1 to age-related diseases, including cancer. Mice and humans with higher levels of IGF-1 often have a higher risk of developing these diseases.

Scientists believe protein intake plays a role in IGF-1 activity. Eating less protein, studies have shown, can lead to lower levels of IGF-1 in your body. So theoretically, protein consumption could be directly linked to disease incidence and death.

Researchers analyzed survey data from 6,381 U.S. men and women aged 50 and above to understand the link between protein, certain diseases and mortality.

Researchers also looked at the differences in risk between those aged 50 to 65 and those over 65 years old. 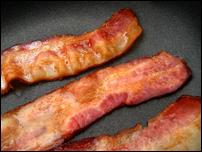 The resultsPeople between the ages of 50 and 65 who ate a high-protein diet had a 74% increase in overall mortality compared to those in the low-protein group. The meat lovers also had four-fold increased risk of dying from cancer during the study's 18-year follow-up.

However, this risk was only seen in those who got their protein from animal sources such as meat, eggs and cheese; the link disappeared if the protein came from plants, such as nuts, seeds and beans.

People who were over the age of 65 and ate a high-protein diet saw the opposite effect. Researchers saw a 28% reduction in death from all causes in this group. Cancer deaths in this older, high-protein group, were also reduced.

Study participants of any age who ate a high-protein diet had a five-fold increased risk of dying from diabetes.

The scientists had IGF-1 data for more than 2,200 people in the study. Analyzing this information, they determined that for every IGF-1 increase of 10 ng/ml, those on a high-protein diet were 9% more likely to die from cancer than those on a low-protein diet.

The study authors concluded that high levels of animal proteins cause increased levels of IGF-1 and possibly insulin in the body, which leads to higher mortality for people ages 50 to 65.

When the mice were switched from a high-protein diet to a low-protein diet, researchers saw a 30% decrease in their IGF-1 levels.

The majority of Americans are eating about twice as much proteins as they should. It seems that the best change would be to lower the daily intake of all proteins, but especially animal-derived proteins.

"Almost everyone is going to have a cancer cell or pre-cancer cell in them at some point. The question is: Does it progress?" study author Valter Longo said in a press release. "Turns out one of the major factors in determining if it does is protein intake."

Eating more than 10% of your calories from animal proteins in middle age could increase your risk of dying from diseases such as cancer and diabetes. But after 65, you may need that extra protein to protect your body from becoming frail.

"The majority of Americans are eating about twice as much proteins as they should," Longo said. "It seems that the best change would be to lower the daily intake of all proteins, but especially animal-derived proteins."

Walter Willett, an epidemiologist at Harvard's School of Public Health, said not much should be made of this study's findings. It's unreasonable to treat "animal protein" as one class, he says, as fish, poultry and red meat are all very different.

Willett also noted that the headline on the press release associated with this study — "Meat and cheese may be as bad for you as smoking" — is a vast overstatement. The researchers did not include data on smoking in their study.

The Institute of Medicine's Food and Nutrition Board recommends eating about 0.8 grams of protein per kilogram of body weight every day in middle age. So a 160-pound person should eat about 55 to 60 grams of protein a day.