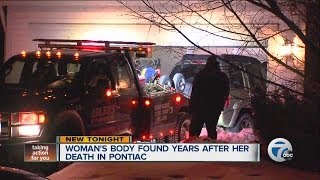 Woman's body found years after her death in Pontiac

PONTIAC, Mich. (CNN) — For years, the payments went out of the woman's bank account.

Nobody batted an eyelid. Bills were paid. And life went on as normal in the quiet neighborhood of Pontiac, Michigan.

Neighbors didn't notice anything unusual. The woman traveled a lot, they said, and kept to herself. One of them mowed her grass to keep things looking tidy.

At some point, her bank account ran dry. The bills stopped being paid.

After its warnings went unanswered, the bank holding the mortgage foreclosed on the house, a common occurrence in a region hit hard by economic woes.

Still, nobody noticed what had happened inside the house. Nobody wondered out loud what had become of the owner.

Not until this week, when a worker sent by the bank to repair a hole in the roof made a grisly discovery.

The woman's mummified body was sitting in the backseat of her car, parked in the garage. The key was halfway in the ignition.

Authorities say they believe the woman died at least six years ago. They're still trying to figure out what happened.

I've been doing this 37 years. Never seen anything like this before.

"I've been doing this 37 years. Never seen anything like this before," said Undersheriff Mike McCabe of Oakland County, Michigan, just outside Detroit.

The woman, who authorities aren't identifying until they've informed her family, paid her bills from her bank account through auto-pay, according to McCabe.

Neighbors said they didn't know much about the dead woman, describing her as in her 40s and of German descent.

"She really kept to herself. We never really heard anything from her," neighbor Caitlyn Talbot told CNN affiliate WXYZ.

Talbot said she wasn't aware of anyone having seen the woman, who traveled a lot, in about six years.

McCabe says neighbors chalked up the woman's absences to her returning to Germany for long periods of time.

Despite years without a living owner, the house was never broken into, he said.

Authorities told WXYZ that the house appears to have black mold inside it, and that detectives entered the building Thursday wearing hazardous material suits.

Another neighbor, Darryl Tillery, told the Detroit Free Press that mail never piled up at the house and the lawn never grew out of order. McCabe said one of the neighbors cut the grass for years.

Cause of death undetermined

Police were dispatched to the house for a welfare check in 2007 after a neighbor reported not having seen the owner in a while. After seeing no signs of anything amiss, police went on their way, McCabe said.

Authorities are still waiting for a toxicology report, which will take four to six weeks, before determining the cause of death. The medical examiner found no signs of trauma to the body, McCabe said.

Dr. Bernardino Pacris, the county deputy medical examiner who conducted the autopsy, told the Detroit Free Press that the woman's skin was still intact, but that the internal organs had decomposed.

Pacris told the newspaper that during the mummification process, skin develops a parchment-like consistency and leathery texture. Finding a body in such a condition is unusual, he said, but "once in a while, we see this."