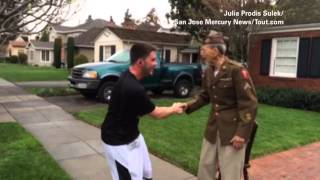 SAN JOSE, Calif. — Hundreds of runners took a spontaneous detour from their race Sunday evening to thank a 95-year-old WW II vet who was cheering them on.

Joe Bell stepped outside his home Sunday evening to cheer on the runners in an 8-kilometer race passing by his house. He donned his uniform that still fits in honor of Pat Tillman. The 8K race was a benefit for Tillman, the fallen Army Ranger who was from San Jose. He left the NFL to serve in the military and was killed in service in 2004.

Bell was clapping and cheering on the runners when something extraordinary happened. Julia Prodis Sulek, a neighbor of Bell and a reporter for the Mercury News, wrote, “It started so simply,” according to her account.

Runners started cheering and waving back to Bell. One of the runners saluted Bell, and he saluted back.

"Go get 'em," Bell said to the runners, the Mercury News reported.

Sulek took out her phone and started recording what was happening. A young man in a red shirt ran over to Bell, shook his hand and thanked him for his service. He then rejoined the race. Another runner followed suit. Soon, almost all of the runners passing by were lining up to thank Bell for serving their country.

I saw all these runners going off course from the street onto the sidewalk and wondered why. So I looked further and saw Joe set up out there. The runners were going up to him to thank him for his service. It was really beautiful.

“I saw all these runners going off course from the street onto the sidewalk and wondered why. So I looked further and saw Joe set up out there. The runners were going up to him to thank him for his service,” Sulek told ABC News. “It was really beautiful.”

Bell was overwhelmed by the love and response of the runners.

“They showed a lot of love to me, and they recognized me,” Bell told ABC News. “I liked that.”

Bell was a former Army corporal who trained paratroopers all over the world for the Office of Strategic Services (OSS) that preceded the CIA.

"I never got recognition in my life," he told Sulek on Tuesday. "I was a jumper in the OSS. That's all."

The video was posted to the Mercury News on Sunday night where it was lost in the sea of Oscars viewers. But it gained more traction on Monday and it quickly went viral, getting picked up by national news outlets around the world.

One of the TV outlets managed to track down the young man in the red shirt who was the first to jog over and shake Bell's hand. His name is Erik Wittreich and he is a former Green Beret that served in Afghanistan and Iraq.

"I just saw this former soldier showing a lot of respect for his uniform," Wittreich told the Mercury News about his brief visit with Bell. "He was clearly proud to show he was in the military. It was important for me to thank him."

Bell's wife Mary died four years ago. He lives with his son, Matt.

"I thought the video caught a moment in time that was honest," Matt Bell said. "There was nothing staged about it. It was an honest response from honest people. We don't see that too much."

And Bell is getting more than just appreciation. The San Jose Giants announced that Bell will be getting his own baseball trading card in their Salute to the Military Trading Card Set. The trading card shows Bell's official military photo from his time in the service. The Giants will also honor Bell at their military appreciation day on April 13. View his trading card on the Mercury News here.