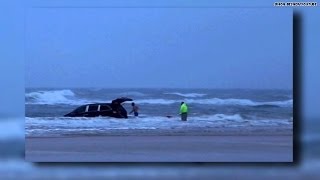 DAYTONA BEACH, Fla. — A pregnant mother who allegedly drove a minivan full of her kids into the ocean around 5 p.m. Tuesday was interviewed by the police for hours before the incident happened.

A family member called police to check on pregnant mother because she was acting strangely and talking about demons, the Daytona Beach News-Journal reported.

"Her sister had called dispatch and told them that she had been talking about demons that day before she left the house," Police Chief Mike Chitwood said in a press conference Wednesday. "She was not concerned about the children because the sister said she would never harm her children. But she did say (the woman) had been talking about demons and seemed a little off."

Police went to check on her and interviewed her for several hours but had no legal justification to hold her and let her go. She told police she was running from her ex-husband.

Video that captured the moment shows a Black Honda Odyssey veering into the waves with several people frantically running and trying to stop it. Witnesses told police they saw the van driving along the edge of the water and suddenly it made a hard turn into the ocean.

“I saw a kid in the back, like waving his arms around, like screaming, 'Help us! Help us!' and the car kept going deeper," Taylor Quintin told CBS News.

Tim Tesseneer, who was visiting from North Carolina and can be seen in the rescue video in a neon green jacket, told WESH.com he was one of the first to reach the minivan.

"The two in the back seat was crying, with their arms out saying 'Our mommy's trying to kill us, please help,’ ” Tesseneer told WESH 2 News.

Tesseneer helped the two kids in the back seat get out and said the mom climbed out through the window and “just belly-flopped into the water.”

The two in the back seat was crying, with their arms out saying 'Our mommy's trying to kill us, please help.'

Immediately after the two kids were pulled to safety, the rescuers realized there was another child in the car that was going deeper into the ocean.

"The kids are screaming, 'There's a baby, there's a baby,'" Tesseneer said. “I get back to the van, and by this time a couple of lifeguards have made it down there to us, and come to find out there's a baby still strapped in the seat, but we got her.”

The video captures the full rescue and shows the mom wandering around disoriented after the rescue.

The woman and her children, ages 3, 9 and 10, were taken to the hospital. They didn't suffer any injuries and police said the kids will be released to family members.

The mother is being held for evaluation in the hospital and is currently refusing to speak to investigators, police said. Authorities are investigating how and why the van went into the ocean.