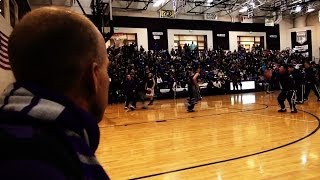 TOOELE – A high school basketball player is inspiring others with an act that started as just a friendly hello between father and son.

Before each tipoff, Ace Hymas, 16, runs to his father, Chad Hymas, and hugs him. As the forward on the Tooele High School boys varsity basketball team, Hymas’ pregame acknowledgment of his father – who uses a wheelchair and sits on the court by the stands – doesn’t go unnoticed.

“Whenever that happens, whenever these guys come up and do that, I think to myself, ‘I’m not the motivator, these guys are because I never told them to do that,’ ” Chad said.

The ritual started a little more than a year ago at a game against Bear River High School. Chad Hymas had been in Greenland, arriving home only 12 minutes before the game. When Ace entered the court and saw his father, he ran up to give him a hug.

“It just came to me right at that moment. It was just an inspirational thought, I guess you’d say,” Ace said.

Every game since, Ace has headed over to his father and hugged him before the tipoff. His captain and teammate, Tyler Lawrence, follows him every time to honor Chad.

It's a moment of love. A word that's hard for a high school student to say.

“I’ve never seen it done,” Chad said. “I’m a sports freak. I love it. I’ve seen people go up and give their dads hugs after they won a championship in college ball. I’ve never seen anything like this. I speak for a living (and I was) speechless. Couldn’t say a word. And I still lose it today.”

Chad was paralyzed 12 years ago in an accident on the family’s elk farm. Before then, he had coached Ace in basketball. He was rushing that evening to feed the elk before practice when a hay bale that weighed more than a car fell on him, breaking his neck. His hands and legs are paralyzed.

Now, the father gives motivational speeches for a living. But he says his son is the real motivator, showing others how to respect people through his actions instead of words.

“These guys honor me by that by acting. It’s demonstrated unannounced,” Chad said.

Ace said the attention he has gotten online has surprised him.

“I was just thinking I was doing a good deed to one of my best friends, but all of a sudden, there it goes,” Ace said.

Chad said that although no words are exchanged, Ace’s love comes through clear with each hug.

“It’s a moment of love. A word that’s hard for a high school student to say. And I’m not even asking him to say it, demonstrate it,” Chad said. “I don’t say one word to him when he does it. I can’t. He doesn’t say a word to me, I know what he’s saying to me.”