DES MOINES, Iowa (CNN) — Brenda Schmitz knew she wouldn't live to watch her four boys grow up. Diagnosed with stage four ovarian cancer, she was told she would die within months.

A month before her death, Brenda did something that now -- two years later -- has brought tears of joy to people throughout her town of Des Moines, Iowa, and across the country.

She wrote a letter addressed to a local radio station's Christmas Wish program. Brenda had a friend keep the letter until her husband, David, found a new woman to spend his life with.

In September, David asked Jayne Abraham to marry him. Brenda's friend pulled through, and the station recently received the letter.

"About a week and a half ago, an anonymous letter was sent to Star 102.5 Christmas Wish. We've been granting Christmas Wishes for over 20 years and I've never read a letter like the one I received from Brenda," station manager Scott Allen says. "Everyone, no matter the age, was moved."

The station decided to grant the wish Brenda laid out in her letter. The station told David only that someone sent in a Christmas wish for his family and asked him to come to the studio.

"I tried to quiz them to ask who it was from, but they wouldn't tell me anything besides it was a very personal wish," David said. 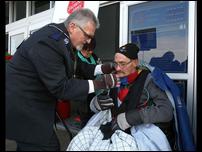 Doug Holladay has always been a giver. As a dying wish, Holladay asked the Salvation Army if he could ring the donation bell for them one more time.

"My reason for writing is this. I have a wish. I have a wish for David, the boys, and the woman and her family if she has kids also. I want them to know I love them very much," Brenda wrote in the letter. She added that she wants them to "always feel safe in a world of pain."

Brenda had three wishes: a massage for David's fiancée; a magical trip for the whole family to create lifelong memories; and recognition for the team of doctors and nurses who took care of her at Mercy Medical Center.

David said it took him some time to comprehend Brenda's letter, but he wasn't shocked by it. "I was surprised, but in a way, I also wasn't. This was Brenda. She had so much forethought before she died. I always love to tell the story. Brenda and I talked before she passed. She told me to meet someone that would love the boys and treat them like her own. I asked her how I'd know when I met that person. Brenda said I would know because she'd be there."

When Jayne and David began dating, she asked David the story behind a rainbow photograph in his youngest son Max's room.

"Brenda and Max's song was 'Over The Rainbow.' They sang it together all the time. The day Brenda died, she passed away at 7:07 a.m. We hadn't had rain for five weeks straight -- and out of the blue, a double rainbow, as bright as can be, stretched across the sky for miles. The local meteorologist said the rainbow was an anomaly since we hadn't had any rain. I knew it was Brenda." David recounts.

"After I told her the story, Jayne looked through her phone and showed me a picture of the same double rainbow." David knew then Jayne was the one, and that Brenda approved.

Jayne's voice cracks when asked what her first thoughts were of Brenda's letter. What meant the most to her, she says, was Brenda's saying "she loved me."

"She said that unconditionally. I always tells David from the first day we met, I talk to Brenda. In my car sometimes we have a conversation about the family and I know she is definitely watching over us."

The radio station will send the family of eight to Disney World, with all expenses paid. "We've never taken a family vacation and this will be wonderful," Jayne said. "It will allow us to create a bond amongst all of us that we haven't necessarily, had a chance to do quite yet. We are always coming and going, so this gives us time to sit back and enjoy each other."

The family plans to take the trip when the stars align in everyone's schedule -- two adults, one son in college, four teenagers, and 4-year-old Max.

When asked when they'll marry, Jayne and David laugh, and again say they're trying to find a time in everyone's schedule that works. At Disney World perhaps? "Now that's a great idea," Jayne says.