OGDEN — Two online petitions with opposing views are gaining momentum after the federal judge's ruling that Utah's Amendment 3 was unconstitutional.

Hundreds of people lined up at the Weber County clerk's office today, in hopes of getting their marriage licenses.

Instead of a marriage license, couples got a letter from the Weber County clerk.

The crowd cheered as Weber County Clerk Ricky Hatch approached the door. But instead of letting them in, he turned them away.

"I apologize to have you have to come here and wait for nothing," Hatch said.

Initially, the Weber County Clerk's Office said it would open for an hour today so same-sex couples could get their marriage licenses.

"What I failed to consider was security issues. I didn't run it by our legal team," Hatch said.

Couples who arrived full of hope, left frustrated and disappointed.

"I feel extremely discouraged but hopeful the people of our state will recognize that the ban on gay marriage is unconstitutional and we deserve as much as anyone to be married," Jessica Chavez said.

That's the sentiment of the online petition, urging the governor to let Judge Shelby's ruling stand. 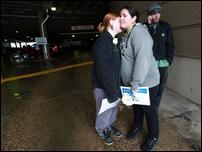 As Utah Gov. Gary Herbert called for "an expedited judicial resolution" Saturday, same-sex couples who thought they could marry in Weber County were left disappointed.

Tim Wagner created the petition last night. In less than 24 hours, more than 17,000 people had signed it.

"What I hope to get from this at least is to get the governor to recognize that there's a substantial portion of the population of voters in Utah who don't view this in the same way he does," Wagner said.

The Sutherland Institute - a conservative policy think tank in Utah - also started a petition, to show support for traditional marriage.

Without giving numbers, it would only say the number of signatures is beyond what was expected.

"We don't hate anyone, we just understand marriage differently and we think that's a valid viewpoint in the public square," Bill Duncan of the Sutherland Institute said.

Both petitions aim to give people a voice.

Jessica Chavez said that she'll let her voice be heard, too. She and her partner of nine years plan to be at the Salt Lake County Clerk's Office Monday morning.

"The fight will continue, and it'll happen for us," Chavez said.

Like other county clerk's offices across the state, Weber County will open at 8 a.m. Monday.

As for the petitions, neither carries any legal weight. Wagner will present his to the governor. The Sutherland Institute said its purpose is to galvanize.