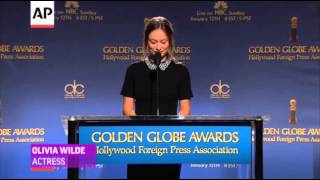 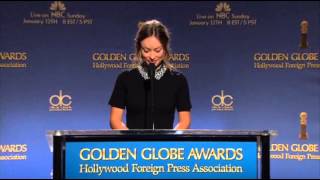 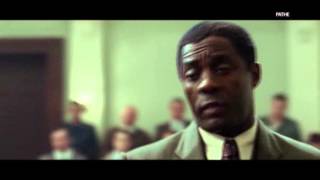 HBO led all TV networks with nine nominations. Starz and Showtime joined Netflix with six each while CBS and NBC each had five and ABC had four.

Netflix's political series "House of Cards" earned a nomination for best TV drama, while Kevin Spacey and Robin Wright were nominated for their acting in the series. With the release of its inaugural season in February, "House of Cards" represented Netflix's first major foray into TV programming. It also earned an Emmy nomination earlier this year, but Netflix is still searching for its first award.

Starting with HBO a decade ago and continuing with AMC and now non-network programming services, the industry is learning that reputations can be built quickly on the basis of one or two strong shows, said David Bianculli, a former TV critic and professor of television at New Jersey's Rowan University.

The true measure for Netflix will be if they can sustain the initial success with additional programs and also if they can show what kind of impact their shows have had beyond critics; you can't find out how many people watched "House of Cards" like you can know how many people see "Scandal" each week, for example, he said.

The Golden Globes set up a potential victory lap for the well-regarded final season of "Breaking Bad," which was nominated for best drama series and earned Bryan Cranston a nod for best actor. After sweeping the drama awards earlier this year, Showtime's "Homeland" was shut out for the major awards.

High-profile actors in HBO movies about music figures earned some notice from the Hollywood Foreign Press Association. Michael Douglas and Matt Damon were both nominated for best TV movie actor for their roles in "Behind the Candelabra," and Rob Lowe had a supporting actor nod. Al Pacino earned an acting nomination for playing music producer Phil Spector in an HBO film.

Starz often finds its original programming overlooked, but broke through this year with its films "Dancing on the Edge" and "White Queen." The Sundance Channel got two nominations for "Top of the Lake."

Don Cheadle of "House of Lies" will try for a second straight Golden Globe as a TV comedy actor, competing with Bateman, Jim Parsons of "The Big Bang Theory" and Andy Samberg of "Brooklyn Nine-Nine." Sentimental favorite Michael J. Fox, whose NBC show hasn't been doing well in the ratings, earned an acting nomination for his work.

The best showing for the commercial broadcast networks, which were completely shut out of the awards given out earlier this year, came in the best comedy category. There, CBS' "The Big Bang Theory," ABC's "Modern Family," NBC's "Parks and Recreation" and Fox's "Brooklyn Nine-Nine" will compete with last year's winner, HBO's "Girls."

Zooey Deschanel of Fox's "New Girl" was nominated for best actress in a comedy, along with last year's winner, Lena Dunham of "Girls." Edie Falco of "Nurse Jackie," Julia Louis-Dreyfus of "Veep" were also nominated, along with Amy Poehler of "Parks and Recreation," who is co-hosting the Golden Globes with Tina Fey.

Louis-Dreyfus actually earned two nominations _ one for "Veep" and one for best actress in a movie comedy for "Enough Said."

"Does this mean I need two dresses?" the actress quipped.

Sofia Vergara earned her fourth straight Golden Globe nomination for her supporting role in "Modern Family." She is hoping for her first win.

PBS' "Downton Abbey" joins "Breaking Bad" and "House of Cards" as best drama nominees, along with CBS' "The Good Wife" and Showtime's new "Masters of Sex."

Cranston and Spacey will compete for best drama actor with James Spader, whose NBC series "The Blacklist" has been a hit in its rookie season. Michael Sheen of "Masters of Sex" and Liev Schreiber of "Ray Donovan" also earned acting nods.

The best drama actress category sets up a competition between two big network shows _ Julianna Margulies of "The Good Wife" and Kerry Washington of "Scandal" _ with the Netflix stars Schilling and Wright, and Tatiana Maslany of "Orphan Black."

"The Globes are pretty lively because everyone is sitting at tables and having a fairly convivial time of it. Actually, the whole thing is a really jolly evening. I wouldn't change anything because I think these kinds of award evenings, America does better than anyone," he said. "They're just so much jollier than they are back at home."