ALTA — Avalanche forecasters said a woman who was caught in a slide Monday afternoon was wearing equipment that may have helped save her life.

Aaron Rice rescued the skier and also caught the incident on video and he said the woman was very lucky that others were around to help her. The avalanche danger is "considerable" right now which means human triggered avalanches are likely. Rice said when he saw the skier, he knew she was on dangerous territory.

Rice said he and his friend were on a backcountry tour in Grizzly Gulch when they noticed the skier headed for a troublesome slope. She skied into the slide, causing an avalanche and was buried near the bottom of the slope.

"Right away, she pulled her avalanche airbag, got dragged through some trees," Rice said. "Because it's a terrain trap, she ended up in the bottom and all the snow landed on her."

The skier had a beacon so Rice did a beacon search and used his avalanche probe. He said they located the woman under 1-3 feet of snow. With the help of two other people, Rice unburied the woman in less than five minutes.

"She was definitely scared," Rice said. 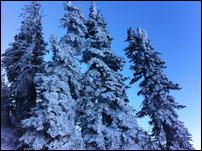 A skier caught in an avalanche was rescued Monday after some fellow skiers caught the incident on video and located the woman.

Rice said if the skier had not deployed the airbag, she may have been buried under another meter or two of snow.

Avalanche forecasters said airbags aren't as effective in rough terrain traps, but it may have made it easier for the woman to swim toward some trees, which slowed her down and allowed more snow to move past her before she came to a stop. But, forecasters gave a large amount of the credit to Rice.

"What really helped her was folks in the area that were experienced with their avalanche rescue gear, knew how to use it, and acted quickly," said Utah Avalanche Center forecaster Brett Kobernik.

Rice said he and his friend were getting video of another skier-triggered slide in the same spot that happened just the day before.

"Grizzly Gulch is a really well-known terrain trap," Rice said. "It's also really accessible so people go there all the time."

Rice said that the skier's friend didn't have any avalanche gear with him at all.

"The guy she was with didn't have a beacon and she skied into a terrain trap, so no matter how much safety gear you have, bad decisions like that are going to get you in a bad situation," Rice said.

Rice said he spends a lot of time in the backcountry and that people should take an avalanche course, get proper training and make sure they are with someone who has the right safety gear.

Avalanche forecasters also said people need to check the conditions before heading out into the backcountry.