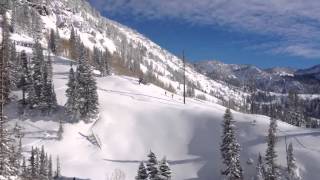 SALT LAKE CITY — A skier caught in an avalanche was rescued Monday after some fellow skiers caught the incident on video and located the woman.

A woman was skiing in Grizzly Gulch outside of Alta Monday afternoon at the time of the avalanche, according to Utah Avalanche Center forecaster, Brett Kobernik. Kobernik said the woman skied into the slide, causing the avalanche and was then caught in the snow and carried to the bottom of the slope. The slide was around 100 feet long and 150 feet wide.

During the avalanche, the woman was able to deploy her avalanche airbag.

A group of people witnessed the incident and caught the beginning of the avalanche on film.

"That's not a good slope to ski," says the videographer as he watches the woman approach.

"It's possible that the avalanche airbag helped her from being buried deeper than she was," Kobernik said. "This was a very close call."

According to the description accompanying the video on YouTube, the woman was "Slightly shook up and lost a ski," but was unharmed.

The avalanche danger for Monday was listed at "considerable," meaning human-triggered avalanches are likely at altitudes above 9,000 feet, Kobernik said. Grizzly Gulch is at 9,200 feet, according to a report by the Utah Avalanche Center.