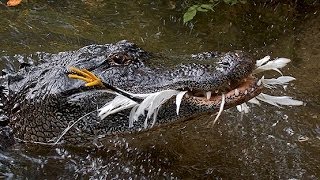 ALLIGATORS USE TOOLS TO HUNT BIRDS

LOUISIANA (CNN) — If you're a bird, beware an alligator with a stick.

That's because some species of the crocodylia order, including the American alligator, use sticks as lures, scientists say.

It's the first time the use of a tool has been documented in reptiles, according to the study published in the current edition of Ethology, Ecology and Evolution.

"This study changes the way crocodiles have historically been viewed," the study's author, Vladimir Dinets, a research assistant professor in the Department of Psychology at the University of Tennessee, said in a news release. "They are typically seen as lethargic, stupid and boring."

Here's what the crocs do that takes a big bite out of that impression.

These discoveries are interesting not just because they show how easy it is to underestimate the intelligence of even relatively familiar animals, but also because crocodilians are a sister taxon of dinosaurs and flying reptiles.

Dinets said the reptiles will gather sticks on their snouts and then lie still in the water. When a bird seeks a perch or tries to grab one of those sticks to make a nest, the croc lunges quickly. It usually ends badly for the bird.

The behavior was first observed in 2007 among crocodiles in India, according to the researchers. Dinets and his research team then confirmed it by observing alligators in Louisiana over the course of a year. They also found the gators used the stick lures more often during the birds' nesting season, from March to May.

Dinets said the study has implications far beyond the swamps of Louisiana and India. Dinosaurs could have been up to similar subterfuge, he said.

"These discoveries are interesting not just because they show how easy it is to underestimate the intelligence of even relatively familiar animals, but also because crocodilians are a sister taxon of dinosaurs and flying reptiles," meaning they lie close on the family tree, said Dinets, who worked on the study with researchers from the St. Augustine Alligator Farm Zoological Park in Florida.

So what did a T-rex use to catch a pterodactyl? Maybe a log?