Engaged couple among those missing in plane crash

10PM: Engaged couple among those missing in plane crash 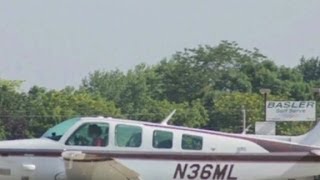 VALLEY COUNTY, Idaho — A search is underway in Idaho for five missing passengers after a small plane flying from Oregon to Montana crashed.

"The call came in from Salt Lake City tower that the pilot was in contact with, he claimed that he was having engine trouble and was trying to get directions back to the Johnson Creek landing strip," Lt. Smith said.

The Idaho Army national Guard and Civil Air Patrol have deployed people on ground and in the air to try and find the site of the crash.

According to FAA records, five people were on board, including the pilot and owner of the plane, Dale Smith. Smith's daughter Amber and her fiance, Jonathan Norton, were also on board. Norton is from Wisconsin and attends BYU-Idaho. The couple were scheduled to be married in January.

The group was reportedly traveling back from Baker City, Oregon after spending Thanksgiving there.

Every hour they're still missing, the family of Jonathan Norton makes a paper airplane.

"As we're coming into this third day, we're feeling a little bit desperate," said Jonathon Norton's aunt Kat Dayton. "We're feeling a bit hopeful, but we're desperate and time is of the essence. These hours tomorrow are very critical."

Norton's grandfather Ralph Dayton, from South Ogden, is also helping with the search and is flying a plane near the crash site to try and find it.

Search efforts were stopped Monday night because of the weather. The search resumed Tuesday until dark and will continue Wednesday at 8 a.m.

More information will be posted as it's available.