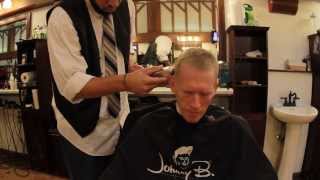 OREM — A homeless family got a chance for a new start with a makeover from local company ATD Movement.

The family had a whirlwind day featuring hair cuts, new suits and job interviews. ATD Movement founder Aaron Murphy said he has wanted to do a project like this for a while; his company donates a portion of the money they make from their rooftop parties to various charitable efforts.

“It was a lot of fun,” Murphy said. “We started out at 10 in the morning and picked them up from the homeless shelter and got done probably around six or seven o’clock at night.”

Murphy said he spent several hours at a homeless shelter with a friend to try and pick someone for the project, but didn't feel like he had met the right person yet. When he was coming out of a hotel later that day, a young blond girl waved at him and he went over to meet the girl and her parents.

While talking to them, he found out they were out trying to apply for jobs and had been living in a homeless shelter for about a year. He invited them to participate in the project, and they started on their makeover adventure the next day.

Homeless veteran gets makeover from charity

Dégagé Ministries and Rob Bliss Creative decided to try something new to get a homeless veteran back on his feet: they gave him a makeover.

“They loved it,” he said. “I keep getting messages all of the time from them. They keep thinking it’s not real, I guess. They’re still in shock.”

The family was treated to hair cuts at Ray's Barber Shop in Salt Lake City. The dad, Reggie, said he didn't think he has had a professional hair cut since he was in seventh grade.

“The mom kind of had just a rough childhood growing up so she was just blown away and shocked the whole time with how nice we were being and the dad was kind of the same thing. He was just really quiet," Murphy said. "It was way cool. Even now there are some times where they’ll just talk to us and break down and cry because of how happy they are for the help."

The parents were also given jobs at Dish Network. Before their interview, they were fitted for suits and given tips on how to how impress potential employers.

Murphy said the dad had been out of work for about a year after losing his license to work as a locksmith. After falling behind on bills, they lost their house and moved into the homeless shelter.

“They’re an awesome family, one of the few we found who weren’t into drugs or anything crazy,” Murphy said. “When I met them they were actually handing out job applications and that kind of stuff, (they) just couldn’t get anything.”

While the family was at the job interview, Murphy's partners went shopping at Walmart to get food for the family. They also bought toys for the couple's 4-year-old daughter, Heavenly, from her Christmas wish list. They put all of the goods in a hotel room they've rented for the family for two weeks. After they get their first paycheck, Murphy said they would help them move into an apartment.

“Once they got the jobs I took them in the car and told them that I was taking them back to the homeless shelter, but we stopped at this hotel and told them I was just going to say hi to a friend real quick," he said. "We came in and just surprised them and had a bunch of stuff there and told them what we were doing for them.”

“They’re doing great,” Murphy said. “They’re happy. Everyone loves them at their job.”