JERUSALEM — The Dead Sea Scrolls are considered the greatest discovery of the 20th Century and now the largest exhibit of the ancient texts outside of Israel has come from the Holy Land to Salt Lake City. The Israel Antiquities Authority (IAA) granted KSL TV unprecedented access to the scrolls as they made their journey.

The landscape of Qumran where the scrolls were found remains as desolate and mysterious as it was more than 2,000 years ago when members of a sect of Judaism, perhaps the Essenes, chose to leave Jerusalem and live there.

Many scholars believe the sect wrote their holy books on parchment and put those scrolls inside the caves. The scrolls remained there until 1947 when a Bedouin who was searching for his lost goat, threw a stone into this cave and heard the sound of a jar shattering. Inside the jar and others, he found manuscripts.

"Finally they realize these scrolls are written in the Hebrew language and these are part of the Bible and so forth. That's the beginning of the story," said Uzi Dahari, Ph.D, Israel Antiquities Authority.

He walked KSL reporters through the archaeological site at Qumran, explaining how those who lived there came to the desert for a purer life. "You must be pure all the time, pure in your mind, pure in your body," Dahari said.

The more than 900 scrolls, written in Hebrew, Aramaic and Greek, include every book of the Old Testament, except for Esther.

"We see that it's the same Bible that we have now — this is amazing," Dahari said.

Scholars believe the majority of the scrolls were written between 200 B.C. and 200 A.D. By the early 1950s, eight international scholars began working on piecing the fragments together. It was an incredible jigsaw puzzle "that is still being studied," said Curator and Head of the Dead Sea Scrolls Project Pnina Shor.

The discovery of the Dead Sea Scrolls is probably the most remarkable and sensational archaeological discovery ever. And you are so fortunate to have an exhibition, coming to Utah.

KSL reporters and photographers captured the painstaking preservation process of the scrolls. The environment of the caves preserved the scrolls but light, humidity and human handling took its toll. The first scholars attached them to glass with cellophane tape, which caused irreversible damage.

In 1991, the Israel Antiquities Authority established a lab. Now no one ever touches the parchment surface — cleansing is done from the back through Japanese tissue paper.

Translators for the scrolls included BYU professors, and it seems as if the scribes brought the text to life. Each time the name of God appears, it is written in different script.

Modern technology has lead to even more discoveries within the scrolls. Infrared photography produces what the eye cannot see. The writing springs to life on what appears to be permanently damaged parchment.

"For example a dark area of the fragment, now it becomes clearer and you can see, really see the text," said IAA photographer Yair Medina. 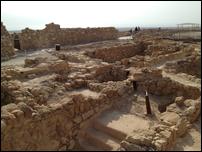 From Israel to Salt Lake City: Inside the journey of the Dead Sea Scrolls

On a departing flight from Tel Aviv earlier this month, excitement buzzed among flight attendants aware of the special cargo on board headed to Salt Lake City.

When KSL visited the Israel Antiquities Authority November 4th, senior conservator, Tania Bitler was examining the scrolls in preparation to go to Utah.

"This condition report will travel with the scroll to Salt Lake and at the Leonardo, she's going to open it," Shor said.

KSL reporters met Bitler at the airport in Tel Aviv and traveled back to the U.S. with her and the scrolls. The scrolls were packed in temperature-controlled carrying cases and placed in first class on the airplane, hidden from view. Utah Highway Patrol officers escorted the scrolls from the airport to the Leonardo.

"The discovery of the Dead Sea Scrolls is probably the most remarkable and sensational archaeological discovery ever. And you are so fortunate to have an exhibition, coming to Utah," said Hebrew University professor Shalom Paul. "It is something that will be very impressive, very emotional."

BYU professor Donald Parry played an instrumental role in bringing the exhibit to Salt Lake. You can read more about that in the Deseret News.