BOUNTIFUL — Two years ago high winds slammed through parts of northern Utah and caused millions of dollars in damage. With heavy wind in the forecast, Davis County residents are preparing for some potential déjà vu.

Back in December of 2011, high winds uprooted trees, ripped apart roofs and fences and caused all kinds of destruction. The Bountiful City Cemetery was hit particularly hard.

"We tried to plant trees that were more open," said Bountiful Mayor Joe Johnson. "The wind can blow through them rather than knock them over."

Johnson recalled the chaos of that infamous storm. As the trees fell, so did power lines — sending the city into darkness.

"We had a disaster," he said. "We couldn't get up some of the streets. Power was completely out in the entire city. So now we're thinking, what are we going to do?"

Bountiful lost about a thousand trees, and other cities throughout Davis and Weber counties were hard hit as well. Golf courses like Davis Park and Oakridge Country Club lost hundreds of trees. Trees fell on buildings, cars and power lines.

In terms of damage, it was a multi-million-dollar storm. 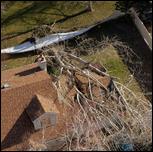 Damage from windstorm could total more than $20 million

Wind-caused damage from Thursday's storm should easily top $20 million to homes, businesses and public infrastructure in Davis County alone &mdash; even as debris removal costs mount over the weeks to come.

Volunteers immediately responded with chainsaws and trucks. The landfills extended hours to make way for the hundreds of vehicles hauling in damaged trees and other debris.

Other communities and the state sent help, especially power crews, to repair the 100 power poles that came down in Bountiful alone.

The city has examined how it handled the storm two years ago, the mayor said. A lot went right, but if there's an emergency situation in the future, the city will use the power of social media — something not utilized two years ago.

"We hadn't used much of that and if that happened tonight, we could get that out in a matter of seconds," Johnson said.

A number of residents took preventive measures after the storm and removed some big trees that could possibly come down during another wind event.

In the event of high winds, residents are advised to stay away from large trees, get patio furniture off the deck, secure trampolines and other large objects in the yard and bring pets inside.