VERNAL — In the past, Jesse Saenz has walked into the courtroom with the hint of a smile on his face and all the swagger possible for someone in handcuffs and shackles.

Saenz, 23, has flashed an obscene hand gesture at a TV camera and appeared to be unconcerned about the seriousness of the charges against him or the brutality of the crimes he's been accused of committing.

Saenz sat quietly in the jury box with his head down — picking at his handcuffs and at his jail uniform — as the woman he beat, raped and repeatedly threatened to kill on June 10, 2012, described the ordeal.

"I knew that I was going to die in that field," the woman told 8th District Judge Clark McClellan.

"I thought about my kids," she said. "My grief was overwhelming for them. They were going to grow up without me, and their mother's body would be found in the bushes."

Vernal police say Saenz did not know the woman, whom he followed off a free shuttle bus offered by a local bar. The woman said he attacked her almost as soon as the bus drove off, throwing repeated punches and breaking her cellphone as she tried to call for help. 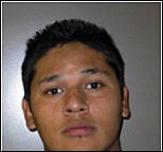 Police are crediting the actions of a homeowner with the quick arrest of a man accused of kidnapping a woman and raping her.

The woman — whose injuries included a concussion, ruptured blood vessels in her left eye and bruises around her neck — had been able to scream early on in the attack though. That drew the attention of a nearby homeowner, who called Vernal police.

"Those policemen may as well have been angels," the woman said Wednesday.

Saenz ran from officers, who said they had to use a Taser to get handcuffs on him. He was booked into the Uintah County Jail, but his family posted a $64,000 bail in March.

Saenz was released on the condition that he wear an electronic ankle monitor and only return to Vernal for court appearances.

"I had to stay with my family to protect me," the woman told McClellan, who approved the conditions of Saenz's release.

"I had to uproot my children and leave the comfort of my own home," she said.

Investigators say the woman had every right to be fearful.

On April 21, Saenz shot and killed Elvis Zachary Olsen, according to Uintah County sheriff's detectives. The 22-year-old's body was found about 100 feet from the Fort Duchesne home where Saenz's grandfather lived.

"I thought about my kids. My grief was overwhelming for them. They were going to grow up without me, and their mother's body would be found in the bushes."

Three law enforcement sources familiar with the investigation say Saenz cut his electronic ankle monitor off after the shooting. He was driving Olsen's car when he was arrested the following day by police in Glendale, Ariz.

Uintah County Attorney G. Mark Thomas, who charged Saenz with murder in the Olsen slaying, also prosecuted him for the Vernal rape case.

"The defendant has earned every day that the court will impose in prison," Thomas said Wednesday.

He argued that McClellan should add a 10-year enhancement to the mandatory minimum 15-to-life sentence Saenz was facing for his guilty plea to one count of aggravated sexual assault, based on Saenz's criminal history.

As an adult, Saenz has misdemeanor convictions for theft and interfering with an arresting officer, court records show. His juvenile record, however, shows he was referred to juvenile court in 2007 on allegations of rape of a child and sex with a minor under the age of 16. He was ultimately placed in a secure facility for juveniles.

McClellan agreed that the prior sex offenses committed as a juvenile warranted an enhanced penalty and sentenced Saenz to serve a minimum mandatory term of 25 years to life in prison.

"I can't look at those photos and the description provided by the victim in this case without my heart going out to her, to realize the pain that she went through," McClellan said, "I'll do my best to protect society."

Saenz, whose only statement to the court was a soft-spoken "I'm sorry," was led quietly from the courtroom by a pair of bailiffs, his head still down. He's scheduled to be back before McClellan for a pretrial conference in the murder case on Sept. 10.