PROVO — A judge on Monday declined to disqualify the Utah County Attorney's Office from prosecuting the case of a Pleasant Grove doctor charged with killing his wife.

The judge ruled that any issues had either been resolved or had not prejudiced the case.

"The motion to disqualify the (Utah) County Attorney's Office is denied," 4th Distrist Judge Samuel McVey ruled in the case of Martin MacNeill Monday. "We can proceed on this case."

MacNeill, 57, is charged with murder, a first-degree felony, and obstruction of justice, a second-degree felony, in the April 11, 2007, death of his wife, Michele MacNeill, 50. His defense attorneys had filed a motion asking to disqualify the Utah County Attorney's Office from the case, alleging that prosecutors failed to provide requested information in a timely manner that may have helped their client.

The defense also alleged that investigators tried to interview MacNeill despite knowing that he had an attorney in a fraud case, disclosed information about the case to the media, and didn't comply with requests for evidence and information, including emails. 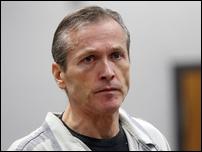 A new trial date was set Wednesday in the case of a Pleasant Grove doctor accused of killing his wife, even as defense attorneys continue to seek to have the Utah County Attorney's Office disqualified from prosecuting the case.

"The remedy is to not disqualify the state, but make them produce the evidence, and that is what has been done," the judge said. He also said investigators were allowed to speak to the media in an effort to further their case and that their attempt to interview MacNeill didn't cause any problems since MacNeill didn't actually speak with them.

MacNeill's trial will begin as scheduled in October.

Prosecutors allege that MacNeill overmedicated his wife, administered a dangerous combination of drugs and drowned her in the bathtub of their home.

MacNeill had worked as a doctor and had a law degree, both of which police believe he used "to commit the murder and frustrate the investigation in an attempt to cover it up," court documents state.

Soon after his wife's death, MacNeill's longtime mistress, Gypsy Willis, moved into the MacNeill house as the children's new nanny. Prosecutors contend MacNeill killed his wife to be with Willis.

MacNeill's defense attorneys, however, have long countered that Michele MacNeill's death was an accident.