SALT LAKE CITY — Everyone sends a text to the wrong person sometime in their life. But not every erroneous text will land you in jail, or turn the mockery of the Internet squarely upon you.

That is exactly what happened to these people who sent just the right text to very unintended recipients. Some fat-fingered texters ended up in jail for their mistakes, and some became the focus of online ridicule:

Don't try to sell drugs to a detective

Salt Lake City detective Dan Wendelboth got a text asking if he wanted any drugs. So of course he played along and set up a meeting to buy some pills for $50.

When 27-year-old Carrie Booker and 42-year-old Christine Rollins showed up to make the sale they were greeted by a team of narcotics officers — and were arrested.

The worst blow to the two criminals must be Wendelboth's thoughts on the situation. "I believe they were a little shocked by the whole situation and obviously weren't real happy, but sometimes we only catch the dumb ones." Ouch.

Want to go halfsies on a Snuggie?

Poor Jane. All she wanted was to get a nice wedding gift for her friend Beth. She thought that by getting together with another one of Beth's friends she could get her something nice. It's a good idea.

But it all went wrong when Jane sent the text to the wrong person. Jane unknowingly sent her text, offering to "go halfsies on one of those blocks of wood that says words like faith and hope" to Eli McCann, a man with a pranking streak in him. And worse, he runs a blog detailing many of his pranks.

What ensued was genuinely hilarious, and well worth the read. Jane opens with the wooden block idea. McCann, pretending to be Beth's friend and the intended message recipient, counters with a "couples snuggie." Jane things it's a joke. McCann assures her it's not. 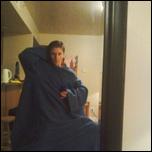 Mystery texts: 'It Just Gets Stranger'

A text-message conversation between two strangers that has gone viral has many asking whether "it just gets stranger," as the title of the blog it appeared on suggests.

The resulting 35-plus text message conversation just gets better and better, crescendoing through pictures of McCann dressed in a long-nosed Venetian mask and Snuggie, and a very polite Jane trying to back out of each terrible gift idea.

Most engaged couples like to do things to build their relationship. Many will do things like go on dates and have meaningful conversations. But one couple decided to take it further, and rob a Wal-Mart together.

William Davis and his fiance, Darcy Freitag, needed a little extra cash. Davis worked in the accounting department in a North Little Rock, Ark., Wal-Mart, and thought they would be willing to share.

Davis sent his fiance, Freitag, a text reading, "combo is 12-15-65, turn handle from bottom to left. Middle shelf. 20's on left, 100's on the right." Freitag walked into the accounting department, opened the safe, and took handfuls of money.

Once the other Wal-Mart accountants noticed that money was missing, they quickly found video surveillance footage showing Freitag walking out of the store with almost $80,000.

Luckily, the incriminating text was found on Freitag's phone, showing Davis' involvement. Perhaps a couple that goes to jail together, stays together.

When someone says, "Come and get me," police will usually obligeIn a bizarre, out-of-the-blue text message, a wanted man, Jason Wrenchy, challenged an Edmonds, Wash., detective to "Come and get me."

It started when detective Brian McIntyre got a text reading, "Who are you?" McIntyre asked who was there, and got no reply.

This story could have ended uneventfully here. But it didn't.

A few days later detective McIntyre was challenged via a text message from the same number to "come and get me." McIntyre kindly obliged.

A quick look-up in the police database revealed that the text came from Jason Wrenchy, a man with two outstanding warrants. So McIntyre replied and asked where he would like to meet.

Wrenchy gave the detective his address, where police then showed up and arrested him.

A man looking to buy marijuana was busted after he texted the wrong number.

A man who calls himself "Chris from New Orleans" asked a Logan resident if he knew where one could purchase marijuana. Chris, who was, in fact, living in Logan, meant to send that text to someone else.

The shocked Logan resident who received the text promptly went to the police, who set up a fake drug sale and arrested Chris.

The detective heading up the sting allowed the Logan resident, whose name was not released, to ride along for the bust. The resident later said that Chris was wide-eyed and clearly surprised to be busted.

I message saying, "I hid the body ... now what?" was sent as a prank by a teen in Arkansas. It was something the girl saw on Pinterest as something to do when bored. So she sent it to a random number — a random number that happened to be owned by a local police detective.

The girl and her father were quickly taken in for questioning, and later released.

It was a strange twist of events, and the police and the girl's father were not amused, saying the ordeal tied up valuable department resources.

So, maybe not everything we see on the Internet is a good idea.

Taylor Wilson is an IT professional at a small Utah company. He has a passion for helping people with technology. Email: taylorwilson@testonetwo.com Online: www.testonetwo.com or twitter.com/twil6