TIMBUKTU, Mali — Shortly after a coup was staged last spring that resulted in extremist groups seizing control of much of northern Mali, presidential candidate and BYU graduate Yeah Samake went to confront the coup leaders at their offices, risking death.

Samake said he waited for an hour until he saw coup leader Capt. Amadou Sanogo and was able to speak with him. He told Sanogo power should be returned to the hands of civilians and that "by doing so, he would become a hero, but if he doesn't, he will be a villain."

He said Sanogo's demeanor changed at that point, although Samake had stopped short of calling him a villain, instead focusing on the heroism that would be found in returning the government to its democratic form.

Why, Sanogo wondered, would Samake dare approach him about giving up the power he had just wrested from President Amadou Toumani Touré?

"I told him I have come because I know he loves his country," Samake said. "He is wearing the uniform of Mali and he has taken an oath to protect the people and the borders of the country. And that stopped him because he saw truth and patriotism in what I told him."

Still, Sanogo declined to return power to Touré. He did ask Samake to speak on national television, though — in an address that would never be heard on the televisions of Malians. Samake said he spoke the same words in that address as he had told Sanogo minutes before. The address was not preapproved and, because of its content, would not be aired. At that, Samake left Sanogo's headquarters. 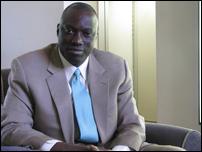 Growing up in a poor village in sub-Saharan Africa, Yeah Samake never imagined himself to be the future front-runner in the 2012 Malian presidential race.

"This was very challenging. Looking back, I could have been killed," Samake said. "I went there out of faith, out of love of my country to challenge them to give the power back to the civilians. That the power does not belong in the hands of the military."

It does, though, Sanogo argued in an interview with Der Spiegel, a German weekly newspaper. The military captain said Touré was corrupt and incapable of dealing with members of the National Movement for the Liberation of Azawad, who had been fighting since Jan. 2012 to make Azawad an independent nation for the Tuareg people, who are the principal inhabitants of northern Africa's Saharan interior.

"Coup isn't a nice word," he said, when asked how the 2012 coup fit into his goal of ridding the Malian government and military of corruption and incompetence.

"I prefer to say that I performed a necessary medical operation. … The country was sick and needed to be healed," he said. "But a patient who refuses to take medicine will die. And that's what happened in Mali. The old regime was sick and now it's dead. I helped it die more quickly in order to make a new beginning possible."

The international community disagreed, though, and the United Nations approved Thursday a peacekeeping force for Mali, which remains unstable even after French forces ousted the militants that controlled much of the north following the coup.

The force, comprised of 11,200 soldiers and 1,440 police officers, will deploy July 1, one week before democratic elections are scheduled to replace Touré, who was ousted in a March 2012 coup d'etat over his handling of a crisis in northern Mali.

I told him I have come because I know he loves his country.

"With the help of France, we were able to conquer the territories which were in the hands of jihadists," Samake said. "We were also able to put in place a transitional government lead by an interim president. And we hope today that the government will take every measure possible to make sure elections are on schedule."

The presidential hopeful acknowledged Mali's problems — among them, a food shortage and huge displacement brought on by the instability of the past year — but said he believes the country is at a turning point, when Malians can elect a "legitimate leader that cares for the people."

"I hope to see democracy restored. I hope to see leaders with integrity. I hope to see the people of Mali meeting their basic needs, including human rights and access to basic services, and having three meals a day and making sure education is available," he said. "My hope is that my country would become prosperous and peaceful and that we will be more reliant on ourselves than on any external forces. That is my hope for my country."