Man runs out of gas during high-speed police chase, arrested

CENTERVILLE — Police caught a rare break during a high-speed police chase when a suspected criminal ran out of gasoline on Legacy Highway and slowly rolled into an arrest.

The incident began Sunday at 1 a.m. when a Centerville officer noticed a Toyota 4Runner driving suspiciously, going in and out of a culs-de-sac and driving without headlights, Worsley said.

The officer eventually pulled the car over near 1400 North and 400 West, calling for backup. The officer said the driver had alcohol on his breath and gave police a false name and birth date. He also observed a female juvenile passenger with a small child on her lap, according to Worsley.

At one point, while officers tried to ascertain the man's real identity, he took off and headed down 400 West at speeds as high as 70 miles per hour in a 25 mile per hour zone, without his headlights on, Worsley said.

The chase led to southbound Legacy Highway where speeds increased to 80 miles per hour. However, the vehicle began to slow down at about 500 south. The car eventually died at mile marker 1, having run out of fuel, Worsley said. 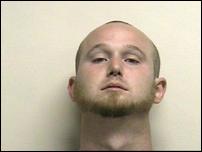 A man told police that he was both invisible and unstoppable after they chased him down Wednesday night.

It was eventually determined that the man was 33-year-old Garrette Lopez, a man wanted by U.S. Marshals for a possible aggravated assault in Virginia.

Worsley said he believes Lopez was scoping the area for things to steal. A possibly stolen bicycle was located in the back of the 4Runner, he said.

According to jail records, Lopez was arrested and booked into Davis County Jail for investigation of vehicle burglary, reckless endangerment, failure to respond to an order to stop, reckless driving, theft, giving false information to a police officer, driving without a valid license, criminal mischief, driving without insurance and failure to wear a safety belt or use a child restraint.

The child and juvenile were released into the custody of their grandparents.