With new bike lanes proposed to be built throughout Provo and the completion of a UTA FrontRunner line to Provo, BYU's Bike Share program serves as yet another sign that residents here are starting to heavily emphasize alternative transportation.

BYU Bike Share is the first rental program of its kind at the university. It was initially introduced a year and a half ago by BYU Sustainability, an initiative put together by the school's planning, maintenance, grounds, recycling and dining departments to reduce their environmental impact, use more renewable energy sources and focus on recycling.

Before BYU approached its business partner Outdoors Unlimited about debuting the program, the store’s only rental offers included its high-end mountain bikes. And those cost between $100 and $200 to rent each week.

The more streamlined Bike Share program charges students just $30 per semester or $15 per term to rent a bike.

“We understand that many students may not be in a position to go out and buy a brand-new bike,” said Todd Hollingshead, a spokesman for BYU Sustainability. “We want to make sure it’s very affordable for students looking to do it.”

Although it took some time for the program to pick up steam, students rented out the entire 50-bike fleet in time for the fall 2012 semester.

“Even during the winter months, the majority of our bikes are rented,” said BYU Bike Share spokesman Jared Thomas. “Students can be seen on their Bike Share bikes regardless of the weather.”

Provo’s population has exploded by more than 50 percent since 1980 and faces the difficulty of developing an infrastructure that is fitting of a rapidly growing city while also maintaining a small-town ethos. BYU currently has about 34,000 students with 3,800 faculty members on a campus with roughly 18,000 parking stalls.

“It’s no secret there are issues with the parking at BYU, so the university’s really trying to make it a more walkable, bike-able campus. From what we can tell, they’re really committed to making BYU a bicycle-friendly campus,” said Zach Whitmore, chairman of the Provo Bicycle Committee, a citizens volunteer group that meets regularly with Provo Mayor John Curtis about transportation policy.

It's no secret there are issues with the parking at BYU, so the university's really trying to make it a more walkable, bike-able campus.

Thomas agrees. He said freshmen housing in particular lacks adequate parking for each student to depend on driving everywhere for their needs.

“Student residence halls are very limited,” Thomas said. “BYU Bike Share helps by providing an easy — and economical — alternative to getting around campus.”

Whitmore is working with BYU Sustainability and BYU Bike Share to equip each rental with spoke cards containing safety tips, including how to yield, signal a turn and use the correct routes. He believes new cyclists benefit from reminders about how to co-exist with vehicle traffic.

“Students are generally familiar with riding rules on campus, but when they drop down into the city they don’t know the regulations,” Whitmore said. “The most common mistakes are forgetting to put lights on your bike and using the sidewalk too often.”

Student renters can take advantage of the minimal price given that they don’t allow the bike to be stolen, lost or fall into disrepair. Students are issued a lock and rental agreement and agree to a $100 liability should the bike not be returned in reasonable shape. BYU Bike Share does cover routine maintenance and also registers and licenses the bikes with the city of Provo.

According to Whitmore, renting is a good option for students and first-time bikers because they can save money by renting a relatively new, well-conditioned bicycle rather than buying one that’s old or worn down. 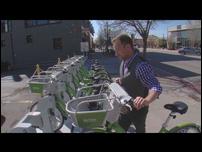 Ben Bolte sold his Mustang and moved downtown. As the director of Salt Lake's new GREENbike bicycle sharing program, Bolte made the move in order to "walk the walk," or rather, pedal the bike.

“A lot of students might really not want to bring a car, but when they buy a low-quality bike for a cheap price, they’re like, ‘Man, I hate this,’” Whitmore said. “It can ruin the experience if the bike isn’t very good or too small.”

This winter, Provo residents suffered through some of the nation’s worst air quality as a result of several strong inversions, topping the charts on several days in January.

Although some of the factors are geographical, Provo is looking to neutralize the problem by reducing vehicle traffic. City officials are seriously considering an extensive new network of bike lanes along some of the city’s busiest streets. Council members have indicated they may approve the new plan by as early as April.

BYU Bike Share might go a long way to populate those new lanes in a city surrounded by trails but not necessarily known for its avid cycling community. Thomas said the school’s considerations go beyond pollution and aims to improve the campus’ sense of being connected.

“Not only is (cycling) inexpensive and good for the environment, but it also allows for more connection with (our) surroundings,” Thomas said. “More cycling means less driving, lessening our distance from one another as a community.”

BYU also announced in January it would close 900 East this spring in favor of a walking plaza for students. The walking area will be located between freshmen housing at Heritage Halls and the Wilkinson Student Center.