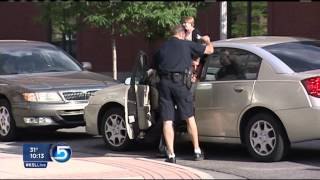 SPJ DISTRACTED AT THE WHEEL AND HANDSFREE

SALT LAKE CITY — Distracted driving: it's something of which we're all guilty, probably more times than we're willing to admit.

Every year, hundreds of thousands of people are injured or killed as a result. Socially, it often seems acceptable. But legally, does more need to be done?

It's hard to imagine, but there was a time when getting behind the wheel meant just one thing — driving. Fast forward more than a century and that one thing has turned into about a hundred.

From eating, drinking and texting to putting on makeup, checking emails and even shaving — it seems driving has taken a backseat to just about everything else in life. But the reality lies in the consequences.

Keri Houston, 18, nearly lost her life when she was struck by a car driven by a man who police said was texting while drunk.

"I flipped in the air and landed on the concrete," she said. "I looked over and saw my leg. I just started screaming. I could see my bone sticking out. I could see everything."

"The pain, it was excruciating," she said. "It was really bad. I could feel by blood, it was boiling."

In a split second, Keri's life changed. A two-word text was all it took to make her another statistic. Numbers show more than 1,200 people are injured every day because of distracted driving. Another 15 are killed.

Distracted Driving
By the numbers...

Do the math and the National Safety Council estimates every 24 seconds, there is a cell-phone related accident.

With a camera in the back of the car, KSL spent five days driving up and down the Wasatch Front. We didn't have to look hard to pick out the distractions.

We found talking, reading, primping and eating. We followed a woman trying to find a balance between lunch, fiddling with her phone, getting a good read in and breaking out a pen to add a few notes.

"They seem to lose regard for everything else going on around them," said Ian Peterson with Pride Transportation.

Peterson has been driving a truck for about 14 years. He said he's seen and heard it all — drivers changing clothes, eating a bowl of cereal and even heating up the romance.

"I've seen people changing who the driver of the car is while they're going down the road," Peterson said.

All that while clipping along at freeway speeds.

Taking your eyes off the road for two seconds, that's why this happened to me.

The biggest problem, however, has to do with cell phones. A driver in Salt Lake City repeatedly went hands free from the steering wheel — at one point for 11 seconds straight. In Davis County, a car straddled the line, eventually fading into the lane of another car. No surprise, the driver was staring at her phone for 22 seconds.

National numbers reveal 80 percent of crashes are the result of a distraction. Whether your talking or texting, studies show it's more dangerous than drinking and driving.

"At what point do you cross over saying, someone needs to do jail for this before they kill someone?" said Scott Fisher, first assistant prosecutor for Salt Lake City. "That's a tough call."

Fisher said Utah has one of the toughest anti-texting laws in the country, but the penalties still lag behind driving drunk.

A first-time DUI will get you mandatory jail time and a hefty fine. But texting drivers likely won't see a jail cell and will pay a much smaller fine.

At what point do you cross over saying, someone needs to do jail for this before they kill someone?

"A DUI is treated much more seriously than texting and driving right now," Fisher said. "I think there might be an argument that maybe it does (need to change)."

She still has a long way to go.

"Taking your eyes off the road for two seconds, that's why this happened to me," Keri said.

There is currently no new legislation in the works for harsher distracted-driving penalties. The reason may come down to the number of fatalities, not the number of accidents.

Here in Utah, the latest numbers over the past six years show an average of 21 deaths per year blamed on distracted driving. That's more than double the number of people killed because of a DUI.

An account has been set up for Keri Houston at Mountain America Credit Union in her name.

*Disclaimer: ksl.com has not verified the accuracy of the information provided with respect to the account nor does ksl.com assure that the monies deposited will be applied for the benefit of the persons named as beneficiaries. If you are considering a deposit or donation you should consult your own advisors and otherwise proceed at your own risk.*