NEPHI — Thursday, a judge handed Eric Charlton a 6 month sentence to jail for charges connected to his brother's death.

Charlton, 27, pleaded guilty in 4th District Court to negligent homicide, a class A misdemeanor, and carrying a weapon while under the influence of alcohol, a class B misdemeanor, in connection with the May 28 shooting death of his 17-year-old brother, Cameron at Yuba Lake.

Thursday, the judge gave a suspended sentence of one year in jail for negligent homicide and two years of probation. The judge said he was considering a jail sentence for the charge connected to alcohol.

Charlton accidentally shot his brother as the two and a friend sat around a campfire at Yuba Lake, drinking. Charlton, a former Marine, had been demonstrating shooting techniques. He was talking about trust when the gun went off.

In court, Charlton told the judge he was ultimately negligent in his actions. He described giving his brother, who was his best friend, CPR.

"I did everything I could to save him and I couldn't," he said.

This has been a difficult case for the family, who said they are anxious to put this part of the tragedy behind them. 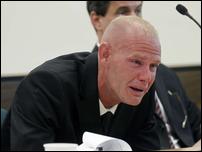 Eric Charlton walked into the courtroom Tuesday with his newborn son in his arms.

"This case from start to finish has been gut-wrenching," Defense Attorney Susanne Gustin said.

Eric Charlton never takes this blue armband off his wrist. It says "Cam Bam," which was his brother Cameron's nickname. On the inside, it says, "I love you."

"He has punished himself. He has a daily reminder of what happened here," Gustin said.

Charlton asked the judge for no jail time for the sake of his wife and two young kids. Charlton's mother tearfully begged the judge to let her take her son home, so they can pick up the pieces and rebuild a family that has been destroyed. His father said this was the hardest thing he could ever imagine going through.

"I hope that Eric can move forward and heal the wounds that exist between he and his family," said Juab County Attorney Jared Eldridge.

Prosecutors left it up to the judge to decide the appropriate sentence.

"My goal with the sentencing today was to try to set the stage for healing to begin," Eldridge said.