One on One with Dave McCann: Lone Peak basketball

SALT LAKE CITY — The Lone Peak Knights are the hottest basketball team in Utah, and Monday's new Top 25 poll has them ranked No. 1 in the country - a first for any local high school.

The team packed its bags Monday to head to a tournament in Fort Myers, Fla., where they'll compete against some of the country's best teams.

Coach Quincy Lewis said of the tournament, "Best of the best. Can't get in a better tournament. Others are competitive, but this is as good as it gets."

It's not the first time the Knights have left the state. The team competed earlier this year in the Chicago Elite Tournament - wowing their competition. The boys hit the road again in the coming months to compete in tournaments in Pennsylvania and New Jersey.

We asked Lone Peak's Eric Mika, "When you leave for these tournaments, do you feel you represent Utah?"

"Yeah," he answered. "I think because not a lot of teams we play expect us to be as good as we are, after people see us play, Utah is on the map."

We are best friends, know exactly where everyone is. That's our goal, to be grounded this year.

And that translates into good things for every high school player in Utah, he said. The Knights may beat other local teams, but they lift them up like no one else ever has.

Coach Lewis said, "(I was) talking to one prominent coach who said, ‘When you are in state I want you to lose every game.' He is a friend of mine. ‘We want to beat you, but when you go out of state, we hope you do great because you represent us.'"

"I think when we step out of state a lot of these teams are cheering for us," said TJ Haws, a junior at Lone Peak. "They want us to do well and show how good Utah high school basketball is."

Up close and personal, the Knights may not look like world beaters. But they haven't been beaten, and they have managed to knocked down a few Utah stereotypes along the way.

"You can draw your own conclusions," said Talon Shumway, a senior, "but it's obvious that we don't look like much, most of the time." Erik Mika

Mika added, "We get all the classic jokes: ‘Are you guys in the same family?' ‘How many moms do you have?' I think that gives us an advantage." 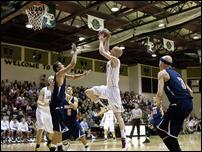 The Lone Peak Knights have high expectations this season. Those expectations may be higher after an impressive first week of the season.

Nick Emery is the most highly touted of these talented Knights and a key component to holding it all together.

"We work so well together," he said. "So well grounded. We are best friends. Know exactly where everyone is. That's our goal, to be grounded this year."

While grounded, they are still flying high and are ranked higher than any Utah school in history. But is this the best Utah team ever?

"There is no way I could answer that," Coach Lewis said. "The best I can say is we have a good chance to be a very good team, as good as there has been. But I would be disrespecting of the teams of the past if I were to say something like that, and I'm not going to do that."

When the coach calls time out and looks into the eyes of the players, he said he sees good kids.

"Good kids, honestly, talented guys. Good kids I love working with every day. Guys who have really paid a price," he said.