Trees under the weight of the heavy snow fell on power lines, cutting power to between 4,000 to 5,000 people from Orem to Ogden. Most of the power has been restored but there are still areas that are affected.

"There are preparations we do months before a storm like this," said Maria O'Mara for Rocky Mountain Power. "We have a very vigorous tree pruning program. We're on a three-year cycle. We're doing a lot of pruning so we don't see a lot of the big branches fall when the snow comes." 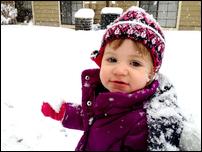 Saturday, homeowners in a Holladay neighborhood were cleaning up fallen branches from their yards not long after power was restored.

The heavy snow caused a mess on Stoney Beck's driveway, despite his best preventative measures.

"We had some guys come in and you can see all these trees have been trimmed really nice," Beck said. "They came up and down the trees and got all the small runners and what not, yet still, it's just too heavy with the snowstorm and really wet."

He fired up his chainsaw for the cleanup. As luck would have it, the driveway was empty when the branches came crashing down.

"My mother-in-law had a car, she's got a brand new Mercedes she had parked here last night. She was going to stay here last night and decided not to, last minute."

This tree in another neighbor's yard came down too — a common problem in this Holladay neighborhood, which is lined with mature trees.

Heidi Gordon and her husband helped their neighbor with the mess their tree caused when it fell.

"The snow is heavy," Floyd Gordon said. "Went out and shoveled it so it's just really wet."

Earlier, they also had to deal with power outages. Their power went out for 45 minutes.

"Just finished putting the garage door up and when I tried to put it back down, I noticed it wouldn't go back down, went in the house and nothing worked in there," Gordon said.

As of 8 p.m. Saturday, nearly 600 customers in Cottonwood Heights and Salt Lake City, were still in the dark.

Rocky Mountain Power and police encourage people to call 911 if they see a fallen power line. For those who just want to report that they are out of power, they can call 877-508-5088