The Dan Jones and Associates poll released Friday has McAdams ahead by three points, with 44 percent of voters surveyed indicating they likely will cast their ballots for the Democrat. Another 41 percent said they likely will vote for Crockett.

McAdams' three-point lead falls within the plus or minus 4.3 percent margin of error, indicating the race will go down to the wire.

The poll of 523 registered voters in Salt Lake County was conducted between Oct. 26 and Nov. 1. Thirty-seven percent of those surveyed said they already had cast their ballots through early voting or mail-in ballots.

The new poll numbers are a reversal of a Deseret News/KSL poll in September that showed McAdams trailing by three points. The amount of undecided voters has dropped as the election nears, with 12 percent of voters saying they haven't made up their minds compared with September's 21 percent.

Pollster Dan Jones said the final moments of the race between Crockett and McAdams will be "a real donnybrook" that will be decided in a ground war. 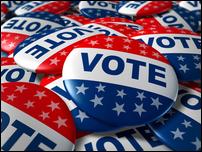 With less than a week to go before Election Day, candidates around the state are making a final push. And new polling numbers from Dan Jones show some really interesting races.

"It will come down to which campaign is the most organized, is out knocking doors and gets people moving," Jones said.

While Salt Lake County is more likely to elect a Democrat, Jones predicted McAdams will have to secure a large number of split tickets to overcome the Republican momentum coming from GOP presidential candidate Mitt Romney.

"It wouldn't be this close if it wasn't for Romney," he said. "For Ben to win, there's got to be lot of split-ticket voting. He's got to get some independents and some Republicans to offset the number of Republicans in the county."

McAdams said he is confident he can secure those split-ticket votes.

"What I'm honored to see is that many of these people that are excited about Mitt Romney are excited to vote for me," he said. "We've got a lot of crossover support, and I think we're going to be able to pull this off."

As the race has gone on, Crockett has gained name recognition and prominence, Jones said. The Republican is sure to see a boost from Romney supporters, with 45 percent of voters polled saying chances are high they will vote straight ticket.

Of those likely to vote straight ticket, 58 percent reported they vote Republican.

Crockett said he thinks the race has evened out as hype from the Republican primary has worn off.

Crockett says Democrats made him target for hackers

Salt Lake County mayoral candidate Mark Crockett has issued cease-and-desist letters after his tax records were posted online containing personal information &mdash; an act he said was meant to make him a target for hackers.

"We started out 15 points up just because people knew us," Crockett said. "As people tuned into the race, we knew that it would tighten."

The McAdams campaign released an internal poll Friday showing the Democrat with a four-point lead over his opponent. Crockett said his internal poll has consistently shown he is a "handful of points" ahead of McAdams.

A current state senator and senior executive adviser in Salt Lake City Mayor Ralph Becker's office, McAdams has long championed his bipartisan attitude and ability to work with all parties in order to get things done.

McAdams said he brings a private-sector perspective to government, and Friday's poll numbers attest to his campaign's steady progress.

"Hard work pays off," McAdams said. "We have been out at every community gathering and throughout this county. … I think my message is resonating with voters, and I'm proud of the work we've done."

The Democrat has outraised and outspent his opponent throughout the race. Highlights of his platform include education, cutting the county's operational costs and facilitating cooperation between county entities.

Crockett is a one-term member of the Salt Lake County Council from 2005 to 2008. He is currently the managing director of his Utah-based consulting company, Vici Capital Partners.

The focus of Crockett's campaign has been reducing county spending while improving vital human services. He agreed the race will be close, coming down to Election Day turnout.

The Republican said his business acumen and experience have made him an attractive candidate to voters.

"People do resonate with business experience and the county being, not a business, but a large and complicated organization," Crockett said. "I think we understand by watching Washington the last several years that this is time for us to change our approach to government."