Method behind the madness: creativity in annoying political ads

630PM: Method behind the madness: creativity in annoying political ads

SALT LAKE CITY — If there is fatigue in this election season, part of it can be blamed on an onslaught of political ads on TV. They seem to come non-stop, and in Utah it's the Jim Matheson-Mia Love race that is the most annoying for people.

But those 4th Congressional District ads are really serving a purpose. Many times political ads can be so annoying, it's easy to overlook how clever they are. For instance, did it ever occur to you that getting you annoyed might be intentional?

"Do you think your state and local taxes are too high? If Mia Love gets her way, they could get higher," one pro-Matheson ad states. 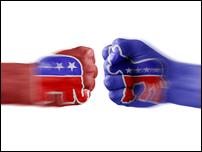 How bad was the negative advertising in the attorney general's primary race? Well, even state GOP Chairman Thomas Wright is saying enough is enough.

A pro-Love ad counters with, "Matheson was the only one in Utah to vote for Obama's $813 billion stimulus."

In Utah we're spared the onslaught of Romney-Obama ads hitting the airwaves in other states.

"Mitt Romney would turn Medicare into vouchers. If Mitt Romney is president, seniors will have many sleepless nights," one pro-President Obama ad says.

"If Barack Obama is re-elected president, what will the next four years be like? One: the debt will grow from $16 (trillion) to $20 trillion," a pro-Romney ad states.

"As we get closer to Election Day, I think they're sort of putting in their last punches to each other and using these attack ads to do that," Bagley said.

And, he said, most of that involves generating fear, among other negative emotions. "They say music is the ‘secret sauce' of advertising, and most of these attack ads use very sort of foreboding, doom-and-gloom kind of music," Bagley explained.

"They'll use sort of unflattering photographs, and they'll stay on that photograph," Bagley said.

Whenever they show their opponent, it's this uneasy, disconcerting kind of music that creates this sense of uneasiness as you watch the spot &mdash; and you associate that with the candidate.

"Whenever they show their opponent, it's this uneasy, disconcerting kind of music that creates this sense of uneasiness as you watch the spot — and you associate that with the candidate," Bagley said.

But negative ads aren't always the best way to sell a politician. Bagley says many in the advertising world think Ronald Reagan's 'Morning in America' ad is among the best ever.

"It's morning again in America," the ad said, "and under the leadership of President Reagan our country is prouder and stronger and better."

However, research shows that the negative ads work in close races.

Still, not every local candidate wants to go negative in Utah. Bagley used the Salt Lake county mayor's race as an example:

"(Ben McAdams) drives results … and a minivan," one ad says. "(He) raises his children, not your taxes."

"Both (Adams') television campaign and his billboard campaign have been very refreshing, from an advertising standpoint, regardless of the political opinions behind it," Bagley said.

As for the 4th District race, Matheson and Love do have positive ads running. But the reality is that people are sick of all of them.

Bagley said when it comes to the truthfulness of the ads content, candidate ads are not subject to truth in advertising standards. That's because their content is considered 'political speech,' which is protected under the First Amendment.