SALT LAKE CITY — A man involved in a road rage incident two years ago that resulted in a woman's death has been sentenced to prison.

John Watkins, 39, was sentenced to up to five years in the Utah State Prison Monday for his conviction on a charge of negligently operating a vehicle causing the death of another, a third-degree felony. The state also recommended Watkins be given credit for the one year he has already served in jail.

On Nov. 11, 2010, Watkins was driving west on state Route 201 near 5400 West when he reportedly cut off 52-year-old Sandra Harper. Harper retaliated by pulling in front of him and hitting her brakes, according to police.

Watkins further retaliated by driving faster and swerved toward Harper's car, bumping her vehicle and causing it to roll. 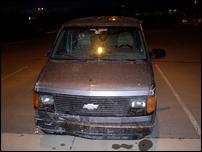 "I must have been angry, I guess, I must have wanted her to know that I wasn't going to take that," Watkins told investigating officers, according to court records.

Harper was initially talking to witnesses who pulled over to help. But her condition quickly deteriorated and she died at the scene. Her son, who was 34 at the time, suffered a compressed spine and he still suffers migraine headaches, according to charging documents.

A toxicology test showed Watkins had meth and marijuana in his system at the time of the accident.