Gas prices could dip below $3, but Utah sees no change

SALT LAKE CITY — Gas prices are plummeting and may dip below $3 per gallon shortly after Thanksgiving, experts say.

The prices have been in a free fall over the past couple of weeks, dropping from an average of $3.84 nationwide on Oct. 9 to $3.58 on Oct. 25. Experts say the drop in prices is due to falling oil prices and greater supply as more refineries come online.

In addition, refiners are switching to their winter blends, which are cheaper than their summer counterparts.

Hurricane Sandy initially caused a drop in gas prices as drivers stayed off the roads in anticipation of the storm, but as the full impact of the storm is beginning to make itself evident, analysts disagree on whether the storm will hurt or help prices.

Oil analyst Stephen Schork told the Associated Press that "with lower Manhattan in the dark, roads from Connecticut to Delaware closed and refineries shut, the lack of implied demand is overshadowing ... potential supply disruptions from Sandy."

The difference between Sandy, which is centered around the Mid-Atlantic and Northeast, and hurricanes that have hit the Gulf of Mexico and led to increased prices, is consumerism versus production. The Eastern seaboard is more of a gasoline consumer than producer, so the storm likely won't have a large effect on supply. 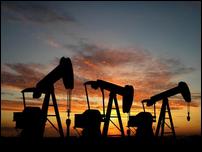 Oil inches up to $86 as storm pounds US coast

The price of oil recovered slightly Tuesday, rising to above $86 a barrel, even as a massive storm was pounding the heavily populated U.S. East Coast.

At least temporarily, though, gas prices in the area of the storm have seen a spike, jumping by 11 cents on commodities markets after Sandy forced the closure of two-thirds of the area's refineries.

Depending on the damage the storm does, the impact on gas prices could last through the winter as demands for heating set in, according to oil analysts with BNC Paribas.

"Given the recent tightness of supplies in New York Harbor, this weather event is only likely to perpetuate strength in gasoline prices," Harry Tchilinguirian and Gareth Lewis-Davies said in a prepared statement.

Prices in Utah rarely rise and fall in line with national averages, which some experts attribute to geographic isolation.

"Prices in Utah tend to follow their own pattern of demand and supply of the Salt Lake market," Scott Schaefer, a professor of finance at the University of Utah, told KSL in March.