MIDWAY — Lisa Calderwood signed up for the race hoping to regain a little bit of normal.

One might think that a brain tumor would make small things matter less. But sometimes it's the smallest things — shaving your hair or being told you can't run — that become the very essence of what a person misses most when life turns upside down.

It began for the Midway mother of four with daily headaches last fall.

"It was out of the ordinary," she said. Running a successful online business and caring for four children while her husband ran a dental practice in Park City kept her so busy, she assumed the headaches were stress related.

"They were annoying, but I would take Tylenol or ibuprofen," she said.

At a Christmas family get-together, her mother suggested the pain might indicate something more serious.

"I don't know if she was inspired or what, but she said, 'Maybe you should get an MRI and just see if anything is wrong.’ ”

On Jan. 2, Calderwood called her doctor, who referred her to a neurologist. He was able to schedule an MRI for the next day. 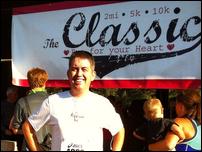 Reasons to Run: How I ran a 5K with chronic illness

Having battled chronic illness for 17 years and suffered a serious leg injury 10 years ago, running wasn't even on my mental radar. Over the years just walking has been difficult for me. So you can understand how unimaginable it was for me to believe that I could ever be fit enough to run 3.11 miles. But I am and I did.

"I wasn't expecting results for three to five days, but the neurologist called the next day, Friday, and said I had a large mass on the right side of my brain," she recalled. "He said to pack my bags and get to the emergency room. … It was just crazy."

In just a week, Calderwood went from a healthy, active mother and business woman to a patient with a brain tumor.

"The word tumor scared me," she said, laughing. "Nobody told me until the next week that tumor meant cancer. I was overwhelmed, but I didn't think I was going to die."

The tumor, which doctors described as a "baseball with fingers," could only be partially removed from her brain. So Calderwood underwent radiation and chemotherapy.

She began having seizures from the radiation and had to take steroids to shrink the swelling in her brain caused by the surgery.

Calderwood was told that the half marathon she'd signed up for in March was not going to happen.

"I thought, 'No, not running! That's what I do,’ ” she said. "Looking back, it's kind of funny to see what I cared about, but that was really hard for me. That's what I did. I loved to run."

What is your escape when things get bad for you? Tell us on the Happy Living Facebook page.

The soft-spoken redhead had been more a jogger than a runner since high school. But eight years ago she became more committed to the sport because it offered her a reprieve from the demands of a busy life.

"I just love how I feel during and after," she said. "Just to be able to get out and relieve stress, especially where I live in Midway; it's so beautiful. I just love getting out and being by myself or running with friends. I've made a lot of really great friends through running. You get to talk — a lot of times about things you would normally have time to talk about."

She ran three half marathons — including her first — while she and her husband lived in Maryland where he attended dental school. Four years ago they moved to Midway, and between her business and having two more children, she just couldn't find the time to run another half marathon. That is, until she signed up for the Moab Half Marathon last March.

While the doctor told her exercise was good for her, running was a little too high impact, and sometimes it hurt her head to jog. So she started out walking on a treadmill.

Over time, however, she began running, and doctors told her if it didn't hurt, she could run.

Running isn't just her reward or her escape, it's how her friends chose to help her raise money for the chemotherapy medicine she'll need to take for the next year. The 15 pills she takes each month will cost her $3,300.

Looking back, it's kind of funny to see what I cared about, but that was really hard for me. That's what I did. I loved to run.

"It's amazing," she said. "I had to start running a little because I had to be able to run my own race."

Shortly after that, she saw a local half marathon that caught her eye — The Best Dam Half Marathon. The 13.1-mile race transported runners on the Heber Creeper (from Heber City) to a trail along Deer Creek Reservoir. Race director Mark Nelson said she was one of the first to sign up for the first-year event.

"I've wanted to run a half (marathon) for a long time," she said. "Timing wise, it worked out that I could run this race. It was close to home and one of the cheapest races I've ever seen!"

The race was harder than she expected — not because of the cancer that still inhabits her brain — but because running up and down trails and streets for 13 miles is a little more difficult than she remembered.

Calderwood was disappointed that she couldn't run as fast as she once had. But she was, in the same moment, grateful that she was able to run at all.

She placed in her age division and reveled in receiving hugs from her children on the course and at the finish.

"For a week to 10 days after that I'm sick to my stomach," she said. "I just don't feel good, I lose energy, I lose my appetite, I just can't do anything. If I try to push myself, I'm like that longer."

So while she battles the cancer, she respects the treatment.

But while she does, she will relish with more gratitude the small victories, like an early morning jog, a conversation with a friend, or the chance to run a beautiful local race.