SALT LAKE CITY — East High School's football program saw its 2012 season vacated Thursday, meaning the school will not participate in the Region 6 playoffs and will keep only one win for the season.

The Utah High School Activities Association voted 3-2 to vacate the season two days after the Region 6 Board of Managers voted 5-1 to impose sanctions against the school and the team's head coach, Brandon Matich.

The Region 6 board declined at the time to vacate the school's wins, instead opting to put the school on probation for a year and impose a fine of $1,500. The team will now lose seven of its wins. One win, against Highland High School, will remain on the record. The school will also be ineligible to participate in the playoffs.

How to the East High athletes feel?

How do the East High football players feel about the ruling? Watch their emotional reaction by clicking the play button on the 6:30PM video clip above.

The undefeated team was reprimanded for playing four ineligible players during the 2012 season. The case the region heard on Oct. 10 involved a student who had attended Highland High School for a time before transferring to an alternative school in the district.

That athlete, junior offensive lineman Tennessee Suesue, said he didn't know there was a problem with his eligibility he played in seven games this season.

"I feel bad for all the other seniors that are graduating this year, because if this season end then what goes on for them?" Tennessee said.

"We thought we filled it out correctly," said Helaman Suesue, Tennesee's father.

But the transfer form wasn't filled out properly, and East High's athletic director, Kathy Butler, didn't follow up to make it right.

"We're talking about one of our great schools who (has) consistently over the years done a stellar job of doing eligibility and things like this, but this was an example of one that got by them," said Kevin Dustin, with the Utah High School Athletic Association.

Butler said she takes full responsibility and resigned her position Wednesday after 23 years on the job. 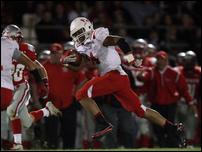 But there's a backstory to the ineligible player. It starts when Tennesee was 8 years old, playing little league with his father as his coach.

"We had taken him up to Primary Children's hospital, where … they told us that he was lucky to even be standing here before us," Helaman Suesue said.

Tennessee was diagnosed with an irregular heartbeat. He received a pacemaker and was not allowed to play football anymore.

Fast-forward six years: Tennessee was a freshman at West High School. When doctors said he was healthy enough to play football again, he jumped at the chance.

"About three and a quarter games into playing at West, he had ended up pulling himself out because he was going to have an episode with his condition," Helaman Suesue said.

So Tennessee transferred out of West High and into the Salt Lake Science Academy charter school. He did not play football there. But once again, after a year and a half, doctors said he was healthy enough to play.

Helaman, now an assistant coach at East High, filled out his son's now infamous tryout form so he could play. They thought he was eligible, so he joined the team.

"Again, it was going to be under my supervision and monitoring," Helaman Suesue said, "and I believe there was nowhere else he could have played then, for me to be able to watch over my son."

"I know they're gonna try to spin it and say, you know, it comes down to the black and white of it — being the paperwork," he continued. "But it's like you're punishing him for getting healthy. It's almost like telling me, you know, it would have been better if he stayed sick. … I wasn't trying to bring an incredible athlete over here, I was trying to bring my son with a medical condition."

East High will appeal this decision to the Utah State Board of Education Friday morning. Administrators are hoping the board will see the unique situation that led to the ineligible player.

Timpview High School was also ordered to forfeit one region game for an ineligible player. Their football teem will still be co-champion of their region, but the T-birds plan to appeal Friday as well.