VINEYARD — A huge source of water no one has ever seen is fueling a massive project in Utah County.

Underground, out of sight at the old Geneva Steel property, there's enough water to meet the needs of about 300,000 people.

For the last five years, construction crews have been building facilities to capture the hidden resource and deliver it to growing communities with a big thirst for water.

The project is on the home stretch. Crews are working on the last seven miles of an 18-mile pipeline. They began laying the pipeline in 2007. In July of 2014, the 60-inch pipe is scheduled to begin delivering water to high-growth areas.

The water will be sold to the municipalities of Vineyard, Lehi, Saratoga Springs and Eagle Mountain. Some of it will also go to the Jordan Valley Water Conservancy District which serves growth areas in the southwestern part of the Salt Lake Valley.

About 14 wells will eventually be drilled to reach the deepest aquifers on the old Geneva Steel site. The property was declared contaminated when the steel mill went bankrupt, but project manager K.C. Shaw said that is not a concern to eventual users of the water.

"We have data to show that it has not contaminated any of the drinking water aquifers here under the site," Shaw said. 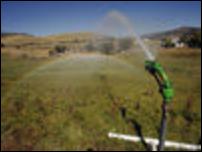 Utah begins a new water year Monday and one weather observer is calling the past 365 days "everything we didn't want."

There are actually several interwoven aquifers at various depths. They underlie much of Northern Utah Valley, extending deep beneath Utah Lake. It's almost like another lake no one can see.

"I wouldn't term it an underground lake," Shaw said, "but more a very slow river that makes its way from the canyon and the mountains to Utah Lake."

In 2005, the Central Utah Water Conservancy District bought Geneva Steel's water rights through the bankruptcy court. The price was $90 million.

During a half-century of steel-making, the Geneva mill used about 50,000 acre-feet of water each year. The new project will extract 42,400 acre-feet annually.

Geneva's old wells were capped. The water district is drilling new ones to insure reliability. Some are going as deep as 1600 feet below the surface to reach a deep "basement aquifer" that has never been tapped before.

A huge 10-million gallon storage reservoir is under construction on slopes above Saratoga Springs. Other new facilities include seven metering stations where the water is distributed to participating municipalities.

Because no federal funds are involved, the cost the massive project will be recovered entirely from water bills.

"Homeowners that receive the water from the municipalities will pay for the cost of the water that's being developed," Pitcher said.

The project is expected to be entirely paid off by the year 2035. In theory, the hardware investment should keep paying off for a long time because melting snow in the mountains will keep restoring the resource.

"We don't believe we'll extract more water from the ground than comes in through natural recharge," Shaw said.